Four extraordinary graduate-level string players have been selected for the fifth class of the prestigious CSO/CCM Diversity Fellowship program.

Cincinnati, June 21, 2020 — The University of Cincinnati College-Conservatory of Music (CCM) and the Cincinnati Symphony Orchestra (CSO) have selected four outstanding musicians for their next class of CSO/CCM Diversity Fellows. Born out of a mutual desire to help American orchestras be more inclusive and to better represent the communities they serve, the performance fellowship program was launched in 2015 with a generous grant from The Andrew W. Mellon Foundation.

Through the collaborative program, CCM and the CSO provide graduate level academic study and professional development and performance opportunities for the Diversity Fellows while simultaneously catalyzing a more inclusive environment for underrepresented musicians in the orchestra field. The program’s tagline — “Bravos Without Barriers” — gets to the heart of its mission: eliminating obstacles that can prevent extraordinary musicians from achieving their full potential.

“The Cincinnati Symphony Orchestra exists to serve our community. Our entire community.” said CSO President Jonathan Martin. “But how can we authentically serve our entire community if a significant part of that community doesn’t see themselves reflected in our organization? The CSO/CCM Diversity Fellowship is one of many steps we are taking to address this disparity. By providing professional opportunities to a more diverse group of outstanding musicians, we hope to cultivate—and begin changing —the next generation of American orchestral musicians.”

“The University of Cincinnati’s ‘Next Lives Here’ initiative is built on the interdisciplinary pillars of innovation, inclusion and impact, and the CSO/CCM Diversity Fellowship program is a perfect example of how those three principles can lead us into a new era,” said CCM Dean Stanley Romanstein. “Our Fellowship is designed to remove the barriers that can prevent talented musicians from pursuing professional carriers in music, but the work to change the face of American orchestras is ongoing. If we’re serious about enhancing racial and ethnic diversity in the arts, orchestras and conservatories have to work together to become more accessible to diverse population of artists, and we have to do everything possible to help prepare them for long-term success.”

Four exceptional string players will officially join the two-year fellowship program in August 2020, bringing the total number of CSO/CCM Diversity Fellows to 9 for the 2020-21 academic year and performance season. The new Fellows are:

The CSO/CCM Diversity Fellowship Program is open to exceptional violin, viola, cello and double bass players coming from historically underrepresented populations in classical music. The program is highly competitive, and each class of Fellows is selected through a rigorous series of auditions. Every year, hundreds of candidates audition for CCM faculty members for admission to the Conservatory. From that pool a select group is then invited back to Cincinnati for Diversity Fellowship auditions with CSO musicians. The program saw its largest finalist group ever during the 2019-20 audition cycle, with 21 applicants invited to the final round of physically distanced auditions on March 14, 2020.

Each Fellow receives full tuition scholarship support from CCM, in addition to a $10,000 per year graduate stipend and a one-time Graduate School Dean’s Excellence Award of $3,000. Each Fellow also receives compensation of $8,000 per season while performing with the CSO.

Twelve musicians have graduated from the CSO/CCM Diversity Fellowship to date. The third class of Diversity Fellows, which is comprised of Camellia Aftahi (double bass), Yan Izquierdo (violin), Arman Nasrinpay (violin) and Alexis Shambley (violin), recently completed the program at the conclusion of the 2019-20 season. Alumni have gone on to work with orchestras such as the Dallas, National, and Nashville Symphony Orchestras, as well as continuing as freelance artists and educators across the country. 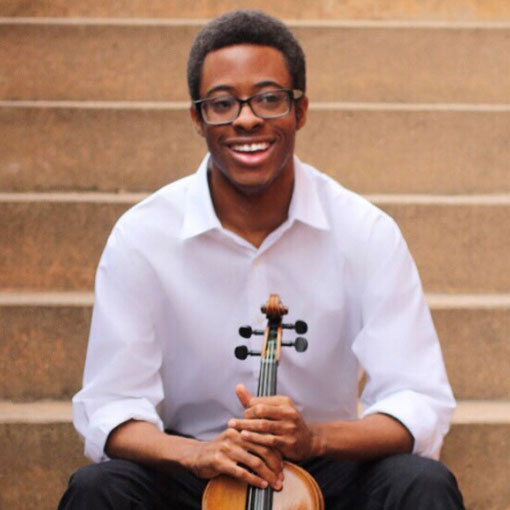 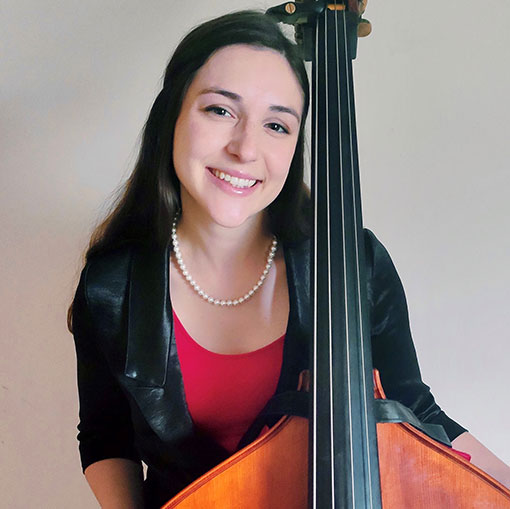 Born and raised in Palm Beach Gardens, Florida, Amy Nickler began playing the violin at age six. Six years later she switched to the double bass and has loved it ever since.

In recent years, Nickler has participated as a fellow in several festivals and orchestras such as the Cincinnati Symphony Orchestra, The Orchestra NOW, Oslo Kammerakademi, Norfolk Chamber Music Festival and Miami Music Festival. In July 2016, Nickler was a winner of the Concerto Competition honoring Ida Haendel with the opportunity to perform as a soloist in the New World Center with the Miami Music Festival Orchestra. Aside from performing, Nickler enjoys her time as a teaching artist for the Nat King Cole Generation Hope, Inc. and the Volta Music Foundation in Havana, Cuba. 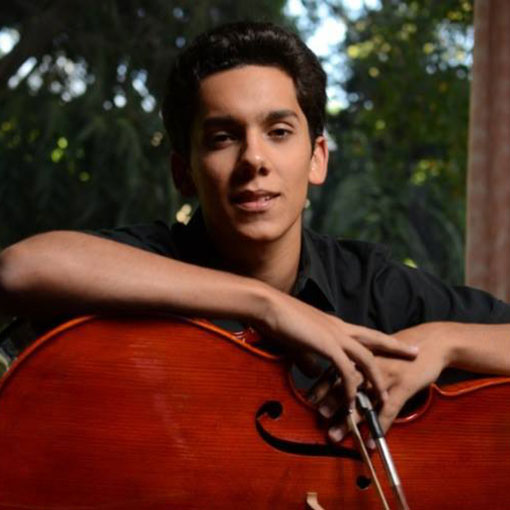 Max Oppeltz-Carroz started playing the cello at the age of four as a student of El Sistema in Caracas, Venezuela. As a part of the world-renowned music program, Oppeltz-Carroz played in the Simón Bolívar Youth Orchestra, the Chacao Youth Symphony Orchestra and the Caracas Municipal Orchestra. He studied with Cesar Noguera, Marek Gajzler and German Marcano. He also participated in numerous master classes with cellists such as Natalia Gutman and Phillip Muller.

In 2014, Oppeltz-Carroz moved to the U.S. to study at the Juilliard School with Professor Richard Aaron. As an undergraduate student, Oppeltz-Carroz participated in several lessons and master classes with cellist Franz Helmerson and studied chamber music with musicians such as Roger Tapping, Sam Rhoades, Sylvia Rosenberg and Jerome Lowenthal. In 2016, Oppeltz-Carroz was fortunate to attend the Music Academy of the West, the highlights of which were taking lessons with Lynn Harrel and performing alongside faculty Warren Jones and Kathleen Winkler.

Oppeltz-Carroz is extremely grateful to be playing on a 1880 French cello from the Caussin School, generously loaned by the Virtu Foundation. 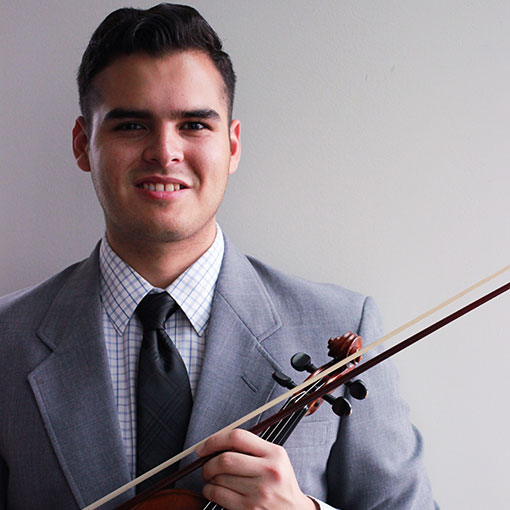 Javier Otalora was born and raised in West Palm Beach, Florida, and began playing violin at age six. In 2018, he graduated from Oberlin Conservatory of Music where he studied violin with Gregory Fulkerson and Sibbi Bernhardsson and viola with Kirsten Docter and Peter Slowik. Otalora is also a recent graduate of the University of Michigan where he received his Master of Music in viola performance with Caroline Coade on a full scholarship.

Otalora was an Orchestral Fellow at the Aspen Music Festival in 2019 and has attended summer festivals such as the Meadowmount School, the Red Rocks Chamber Festival, the Dali Chamber Festival and Spoleto Festival USA. Otalora is a passionate orchestra, chamber and contemporary music player. He has performed with musicians and groups such as the Lansing Symphony, the Aspen Conducting Orchestra, the Spoleto Festival Orchestra, members of the International Contemporary Ensemble, the University of Michigan’s Contemporary Directions Ensemble and Sibbi Bernhardsson from the Pacifica Quartet.

Otalora is also involved in music education, having taught violin and viola in Panama for two consecutive years through Oberlin’s “Panama Project.” In addition, he has taught violin, viola and chamber music at the Oberlin Community Music School and was also a strings teacher at Mitchell Elementary School in Ann Arbor, Michigan.

In 2017, Otalora received the Martin L. King Career Grant which allowed him to return to Panama that summer and run his own chamber camp at the University of Panama. In his free time, Otalora  enjoys eating pizza with friends, reading about airplanes, and fixing computers and printers. 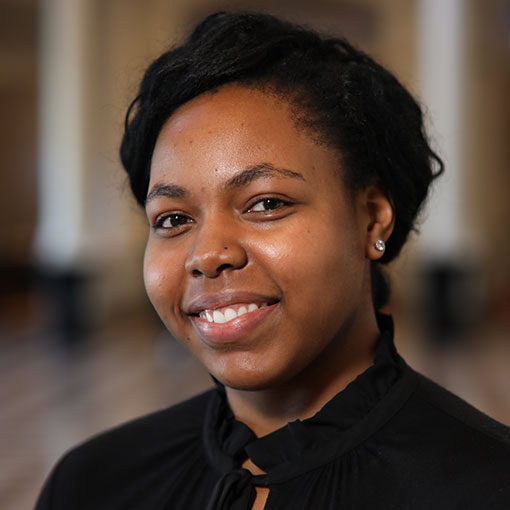 Edna Pierce is a native from the Cincinnati area and a recently graduated student from CCM in the spring of 2019 with a Bachelor of Arts and a minor in Spanish. She currently studies viola performance as a Master of Music student at CCM. She has been studying viola under the tutelage of Dr. Catharine Lees. Edna has been involved in programs such as the National Alliance for Audition Support (NAAS) Audition Intensive, Boston University Tanglewood Institute, Cincinnati Young Artist Chamber workshop, and the National Orchestral Institute and Festival (NOI+F). In addition to her love for the orchestra and playing viola, Edna has sought out opportunities to expand her scholastic endeavors by completing a minor in Spanish language, joining the Sigma Alpha Iota women’s music fraternity, and becoming a Ronald E. McNair scholar at the University of Cincinnati.