Skip to Main Content
About / Report to the Community / Electronic Media

The sounds of the Cincinnati Symphony Orchestra and Cincinnati Pops were experienced worldwide thanks to major electronic media initiatives during the 2018-19 season.

Released in November of 2018, American Originals: 1918 was the first commercial release from the Orchestra following the historic renovation of Music Hall. This Pops album was recorded the prior year in front of live audiences, and features collaborations with Rhiannon Giddens, Pokey LaFarge and Steep Canyon Rangers.

The Cincinnati Pops released its latest album, American Originals: 1918, under the direction of John Morris Russell in November 2018. The recording is inspired by America’s cultural awakening at the end of the First World War one hundred years ago and the distinctly American musical styles that reflect the country’s diversity. This album celebrates and reimagines popular songs of this era that remain fresh and relevant today with acclaimed musical collaborators including Rhiannon Giddens, Steep Canyon Rangers and Pokey LaFarge. The 95th Cincinnati Pops album was recorded live at Cincinnati Music Hall November 10-12, 2017.

American Originals: 1918 was made possible through the generous support of Anne Heldman, John & Suzanne Bossert and Otto Budig.

A video stream of a recorded live performance from American Originals: 1918 was offered for 45 days, and garnered 21,239 views. The album also has four companion videos in the Pops’ “American Soundscapes” series. As of September 2019, those videos have reached a global audience of 720,122.

July 5th marked the global release of the latest Cincinnati Pops recording, Voyage, under the direction of John Morris Russell. The first studio recording made at Cincinnati Music Hall following a major renovation draws inspiration from the stars and includes the world premiere recording of the title track by Academy Award-winning composer Michael Giacchino. His composition, Voyage, was co-commissioned by the Cincinnati Pops and the National Symphony Orchestra and commemorates the 50th anniversary of the Moon landing and the historic “giant leap for mankind.”

According to Janelle Gelfand writing for the Cincinnati Business Courier, the title track is a “spacious tone-poem evoking the Apollo 11 moon mission, commissioned by the Cincinnati Pops and the National Symphony Orchestra. It is a cinematic soundscape of appealing themes and colorful atmospheres. A tuneful section for harp (Gillian Benet Sella) evokes the celestial voices of outer space, countered by dramatic drumming and bold themes in the brass.”

The Cincinnati Pops is grateful to Mrs. Edyth B. Lindner, along with Mr. and Mrs. Fred Heldman and George and Sarah Morrison III, for their generous support of this album, which debuted at number six on the Billboard Classical chart.

Voyage also has companion videos in the Pops’ “American Soundscapes” series. As of September 2019, those videos have reached an international audience of 315,329.

The Cincinnati Symphony Orchestra and Music Director Louis Langrée released Transatlantic on August 30 The album showcasing American composer George Gershwin’s take on bustling Paris, French composer Edgar Varèse’s take on New York’s soundscape, and Igor Stravinsky composing the same work across two continents is sure to be a highlight into the 2019-20 season. This album includes the highly anticipated world premiere recording of the critical edition of George Gershwin’s An American in Paris. The CSO also gave the world premiere performance of this new edition at La Seine Musicale in Paris in 2017.

Transatlantic is made possible by the generosity of Susan Friedlander, Irwin and Melinda Simon, Sheila and Christopher C. Cole and Mace C. Justice, with additional support from Rosemary and Frank Bloom.

On the Airwaves and Online

In addition to video streaming, the Orchestra reached a national audience of 44,873,100 through American Public Media’s Performance Today and SymphonyCast.

Through WGUC’s 2018-19 season broadcasts and the “CSO In Concert” digital stream, 85,700 listeners experienced the Orchestra. 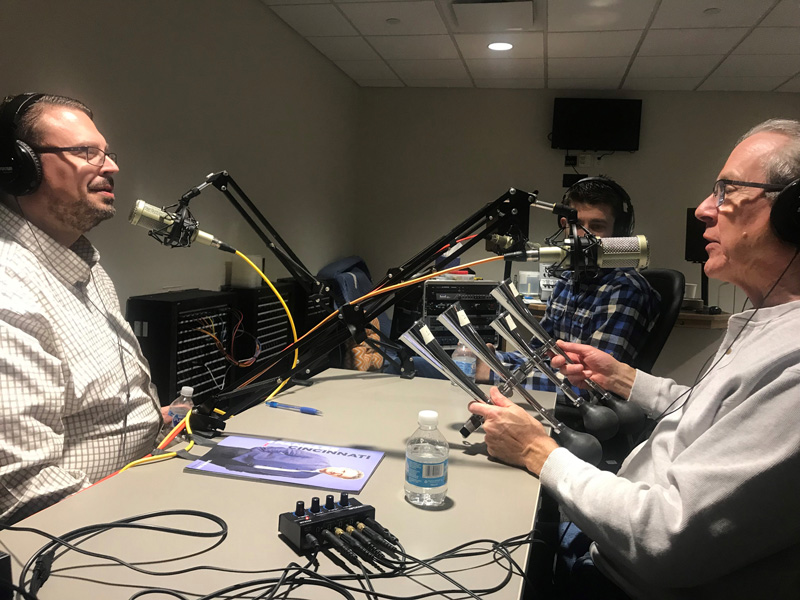 The Fanfare Cincinnati Podcast goes behind-the-scenes to explore the world of orchestral music and the region’s vibrant arts scene. Since the podcast’s launch in June of 2018, nearly 12,000 listeners have tuned in