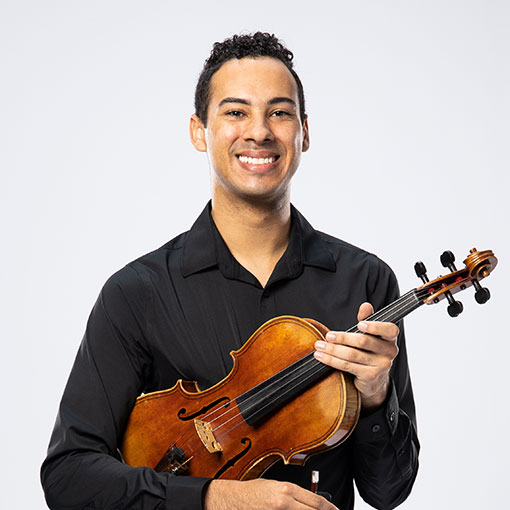 Tyler McKisson is a 24 year old orchestral and freelance violist from Arvada, Colorado who is currently a first-year diversity fellow at University of Cincinnati College-Conservatory of Music pursuing an Artist Diploma. McKisson completed a master's degree in Viola Performance at the University of Colorado - Boulder where he studied under Erika Eckert. McKisson received a Bachelor of Music degree in Viola Performance at the University of Northern Colorado where he studied under Christopher Luther and Anne Lanzilotti. McKisson began his studies under his first private instructor, Brian Cook, at the age of fourteen.

McKisson has participated in masterclasses as part of an ensemble and as a soloist led by artists such as Guillermo Figueroa, Robert deMaine, and Matthew Dane. McKisson was a tenured member of the Cheyenne Symphony Orchestra for four seasons and has been a substitute for other local Colorado orchestras including the Boulder Symphony Orchestra and the Greeley Philharmonic Orchestra. Recently he won a substitute position in the New World Symphony Orchestra, based in Miami, FL. He is a member of the Dynamix String Quartet which performs an array of pop songs, classical pieces, and new music. Dynamix has performed two world premieres by local composers Eric Scott Alexander and Conner Lee Shaw. McKisson was also a member of the All Angles Orchestra which was the recipient of the Downbeat Student Music Award for Large Jazz Ensemble in 2018. Additionally, the ensemble recorded their debut abum, New Angle in 2017 through the Outside in Music Record Label.

McKisson has been a national finalist in the MTNA Competition Chamber Division and has received a number of scholarships and grants to aid his undergraduate and graduate studies. He has participated in several summer music programs including the Aspen Music Festival and School in Aspen, CO; Zodiac Music Academy Festival in Valdeblore, France; Music in the Mountains in Durango, CO; and Rocky Ridge Music Festival in Estes Park, CO.

You can enjoy Tyler perfoming on the Music Hall stage at the following concerts: