How did you connect with Cincinnati Pops Conductor John Morris Russell? And how did he talk you into co-hosting a live performance at Music Hall celebrating The Cincinnati Sound?
It was probably Peter Gistelinck, who ran the Kalamazoo Symphony and turned me out as a symphonic performer. He may have mentioned me to John, who then offered me this co-hosting gig with him celebrating The Cincinnati Sound. He didn’t know how fast I’d jump on this.

What exactly is The Cincinnati Sound to you? How do you define it?
I happen to have a 30-year friendship with a chap named Seymour Stein, who, before he founded Sire records and signed Madonna, apprenticed in Cincinnati with Syd Nathan at King Records. I’ve learned about King and so much other influential Cincinnati music over the years.

Which Cincinnati recording artists from the days of King Records and Herzog Studio in the 40s, 50s, and 60s are your absolute favorites? And what about their music turns you on? 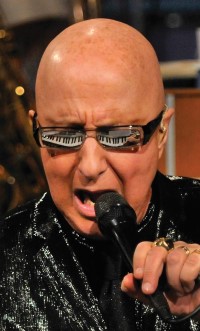 Hank Williams is hands down a genius of lasting contribution whose songs I love. The Isley Brothers’ music has a special connection to me, but James Brown, the Godfather of Soul, is my Soul Brother #1. We’ll always be dancing to the stuff the invented.

What do you think about the color red? It seems to be JMR’s favorite, especially “Pops red.”
To me red can be a sign of danger, especially when it comes in one shade—Pops Red, the color of JMR’s performance jacket. But that’s the kind of danger I like.