If It Sounds Good, It Is Good!

Ten years? John Morris Russell is celebrating 10 years as the conductor of the Cincinnati Pops?

It feels like it was just a minute ago when he arrived. But when I think it through a little better, I realize that John has been part of our lives for much, much longer. He’s been with us through countless musical milestones—from the 2017 Asian tour to Lumenocity, from the birth of Classical Roots to the World Choir Games. And Home for the Holidays. He’s marshaled us through countless Fourth of July holidays with “Red, White and Boom.” And then there was that incredible evening with Aretha. And American Originals. And the groundbreaking American Soundscapes partnership between the Pops and CET. And…well, there are more highlights than we could possibly list.

Of course, you have to remember that John has led a couple of different lives here in Cincinnati. He’s pulled off something that is a rarity in the world of orchestral music. He first came to Music Hall in 1995 as the Assistant Conductor of the Cincinnati Symphony Orchestra. A year later, he became Associate Conductor.

“It was a great position,” says Russell. “And I had so much freedom within my small purview. I got to conduct all sorts of music.”

But when you’re an associate conductor, you are the go-to guy, “the chief cook and bottle washer,” in John’s words. You’re the conductor who gets handed all the “other” concerts, the ones that tend not to garner headlines or attract world-famous guest artists. Think Lollipops Concerts. And Young People’s Concerts. And every manner of outreach performance you can imagine.

But JMR, who got his start leading youth orchestras in his hometown, Cleveland, welcomed every one of those opportunities.

“Every concert is a springboard for great creativity,” he says. And he’s not paying lip service when he says that. He is completely sincere about it. “It doesn’t make any difference who the audience is or what their ages or experiences are. They’re there to hear music. And we’re there to share it with them.” 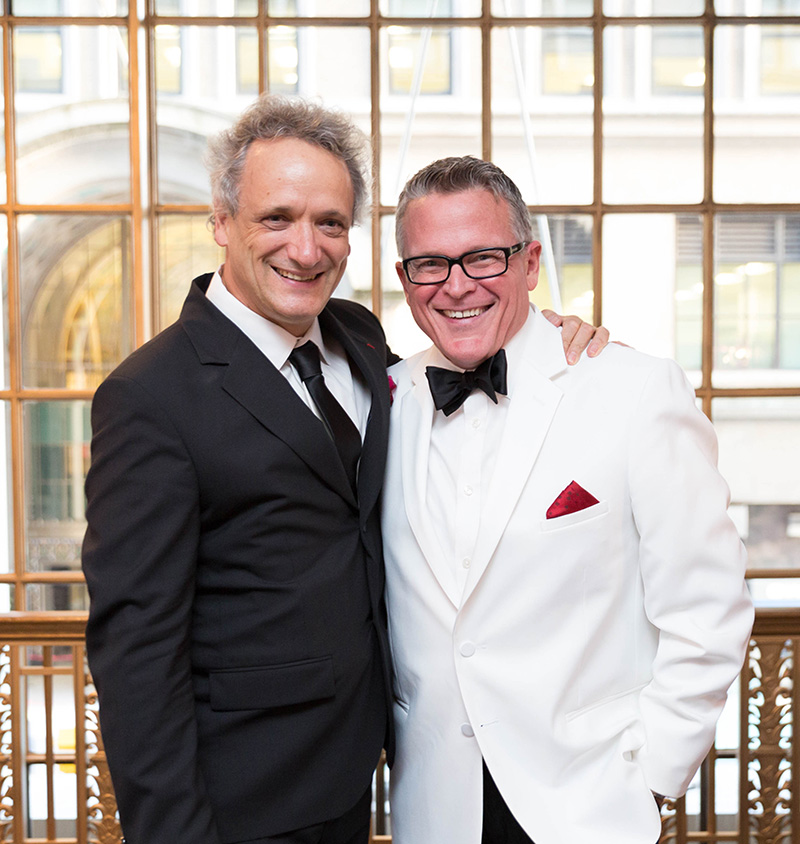 Unfortunately, appointments as an assistant conductor are inclined to be short-term propositions, often as short as 3–4 years. We were fortunate that John stayed longer than most—11 seasons in all.

“When you’re in that position, at some point in time it’s expected that you’ll leave,” says Russell. “Off you go—you’re out of the nest. You’re expected to go on to some logical step up the ladder of progress.”

And he did just that. At the end of the 2005–2006 season, he left the CSO to devote himself full-time to the Windsor (Ontario) Symphony Orchestra, where he had been music director since 2001. By the time he departed from Music Hall, he was already well on the way to changing Windsor’s capable, but relatively cautious, orchestra into one with a sterling reputation—an ensemble that was willing to take chances.

A few years later, though, his career took a most unlikely turn. He returned to Cincinnati.

“You never really expect to come back,” says Russell. “The second time around has been even better than the first. It’s been immensely gratifying.”

That goes for us, too, John. 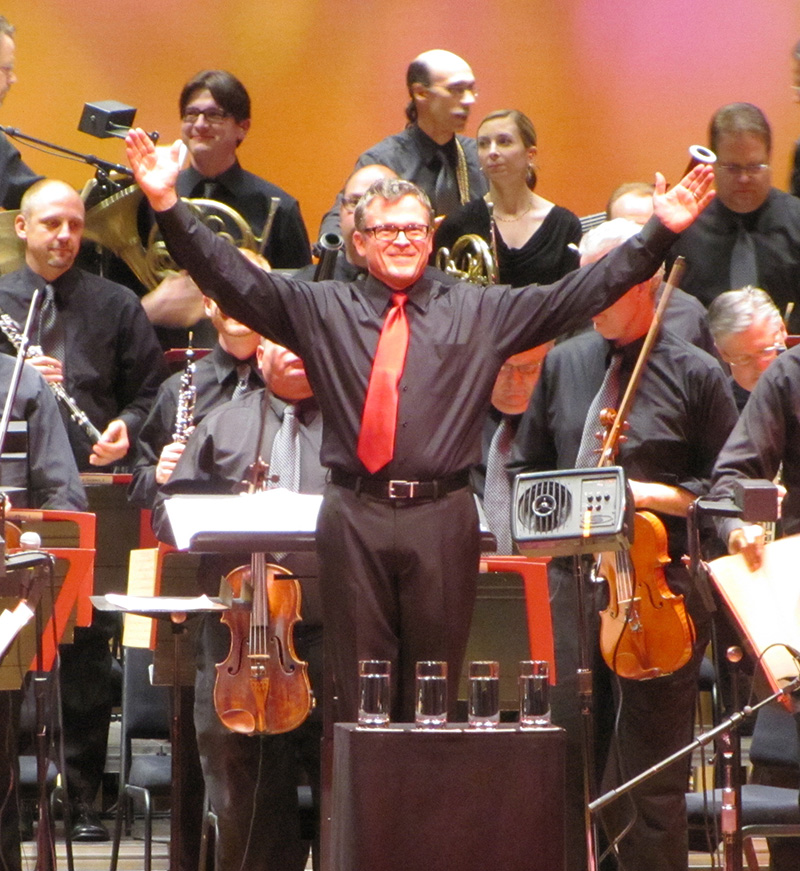 One of JMR’s first concerts as Pops Conductor,
Sweet Sounds of the 70’s, November 2011.

JMR was introduced as the new conductor of the Pops at the very end of 2010. There was a certain jubilance when the announcement was made. After all, here was a conductor we adored. Someone we knew and trusted.

But the position came with a challenge, too. A profound one that almost no one wanted to talk about. Not openly, at least.

John came back to Cincinnati because Erich Kunzel, the conductor of the Cincinnati Pops for a remarkable 32 years, had died a year earlier.

Paul Frankenfeld, the CSO’s associate principal viola and a member of the Orchestra since 1979, remembers the sense of despair that enveloped the Orchestra in the wake of Kunzel’s death on September 1, 2009.

“There was a real sense of urgency,” recalls Frankenfeld.

After all, Kunzel was one of the foremost stars in the world of Pops orchestras. And over the course of more than 30 years, he had built the Cincinnati Pops into a household name. The very idea of trying to fill his shoes was daunting. Kunzel was a one-man juggernaut, conducting Pops concerts all over the country—he led the Boston Pops more than 100 times—and creating more than 90 recordings with the Cincinnati Pops. Who could the Orchestra possibly engage that would engender the same sort of enthusiasm in audiences that Erich Kunzel had?

The answer was right in front of them.

“When John was announced as the new Pops conductor, not only was the response among the musicians very positive,” says Frankenfeld, “but you could also feel that there was an enormous sense of relief throughout the whole organization.”

If we thought that Erich was a huge onstage personality, we hadn’t seen anything yet. JMR seems to will a room of people into following along with him—even a room as large as Music Hall. Or a mammoth park crowd. To say he is enthusiastic barely scratches the surface.

“He’s unlike any other musician I’ve ever known,” says Eric Oliver, one of the Classical Roots founders.

“He’s a listener—he gets it,” says Kathy Jorgensen-Finley, a member of the team that created Classical Roots.

“He’s always eager to learn—from anyone,” says Anne Cushing-Reid, director of Preparatory and Community Engagement at the University of Cincinnati College-Conservatory of Music and another member of the group that launched Classical Roots.

They are phrases you hear over and over again when you ask about JMR. He may occasionally be over-the-top on the stage. But he is, in almost everyone’s estimation, sincere. Genuine. Authentic.

“There is nothing fake about him,” says Finley. “He loves every single person regardless of socioeconomic status, regardless of where you live. He wants every person in the audience to feel like he has known them forever.”

Not unexpectedly, those are qualities that audiences find nearly irresistible. In an era where so much orchestral music has a reputation as being standoffish or elitist, JMR’s concerts are welcoming. Most important, he accomplishes all of this without compromising the Orchestra’s musical standards. 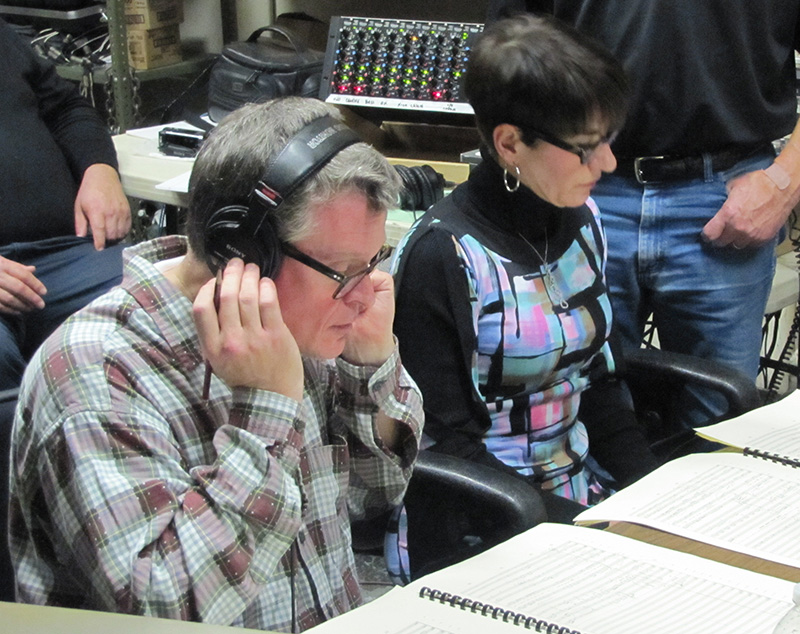 JMR at his first recording session as Pops Conductor
for the 2012 Home for the Holidays album.

In a recent story in Cincinnati’s Movers and Makers magazine, he spoke of his “mantra for doing family concerts. You have to make sure to play the good stuff. I don’t think you do anyone any favors by dumbing it down. Whether you’re playing in someone’s church or a shopping mall or a major concert hall, you play the good stuff—always.”

Finley, who has known JMR for more than 20 years, says that has been his attitude as long as she has known him.

“He inspires everyone,” she says. “And it never stops. As soon as you’re done with a performance he has conducted, he’s already planning how he can improve the program next year. It’s never good enough to be good enough. It always has to be better.”

When he returned to Cincinnati, John remembers the elation he felt when he was able to reap the benefits of some of the programs he had helped to launch as the CSO’s Associate Conductor.

“One never expects to harvest the seeds you planted 20 years ago,” he says. “You don’t think you’re actually going to get to see how the music you engender in audiences makes a difference. But I realized that many of those parents who had taken their kids to the Family Concerts were back at Pops concerts, singing along with artists they loved. Their kids were now off in college. And those parents were among our biggest fans. And, their kids who came to Music Hall for their first experiences are the same ones who are here on date night.”

We’re closing in on the end of the Pops season at Music Hall. But JMR still has a couple of extraordinarily busy weeks before he wraps up the season.

“We started Classical Roots more than 20 years ago,” says JMR.
“We thought it was the right thing to do.” 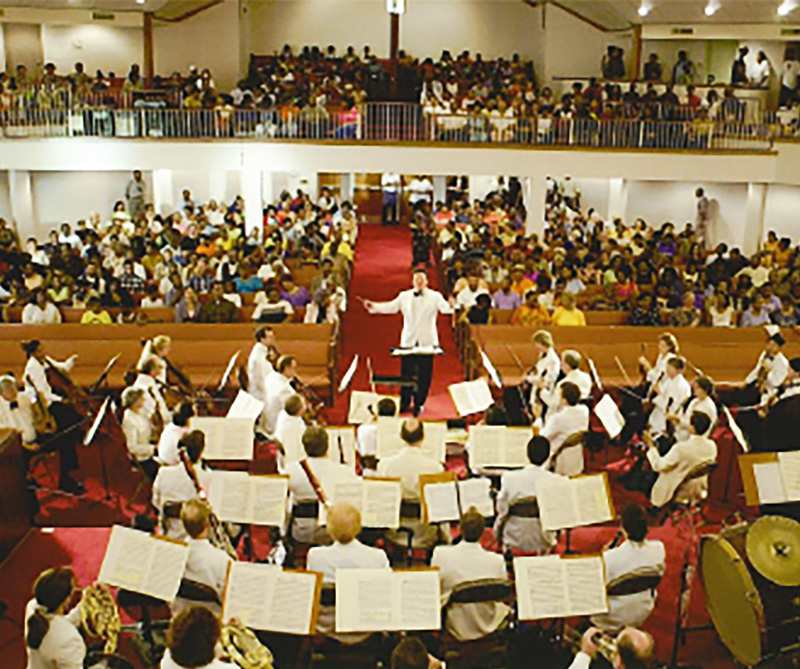 Remember, the first Classical Roots took place just three months after the shooting of Timothy Thomas by Cincinnati Police and the civil unrest that followed it, leading to parts of the city being under curfew for four days. The racial tension in the city was palpable. Into the middle of this came JMR and the CSO.

“And, as it turned out, it was the right thing to do,” he says. “But what is most telling, I think, is that we kept it going year after year. It wasn’t just a one-time thing. By keeping it going, we’ve had a chance to create this really beautiful relationship. We can see the difference, from our Nouveau kids going on to extraordinary things to our youth audiences and the music we perform. These relationships have affected everything.”

A week after Classical Roots comes the big celebration of JMR’s decade—“JMR’s Greatest Hits,” April 29–May 1.

In typical JMR fashion, the performances will have a little bit of everything, from Broadway to jazz, bluegrass, funk and pop. The Pops will be joined by vocalists Tatiana Mayfield and Brian Stokes Mitchell and Cincinnati’s favorite folk/blues/Americana duo Over the Rhine. To top it all off, the performances include a work commissioned from composer Eric Whitacre, winner of a Grammy Award for his Light & Gold album.

“It should be a wonderful salute to John,” says Julie Spangler, keyboard player in the Orchestra and a member of the Cincinnati Pops Poptet. She recalls how skillfully he navigated the complicated emotional situation when he took over the Pops baton from Kunzel: “He so humbly and beautifully paid respect to Erich and Erich’s audience when he stepped in. He didn’t turn the programming style upside down on day 1; instead, he used what had worked for a long time and added his personal touch to it all. As time went on, he put his stamp on his concerts more and more, and the audience showed up to listen.”

Over the course of that decade, the Pops has now become JMR’s orchestra.

So what’s next? How does JMR keep the repertory and the relevance fresh? As always, he is a font of ideas and big dreams. Or—heaven forbid we even discuss this—will he stay?

“The thing is, I do have other plans,” he says, knowing how that must sound to the audiences who have grown to rely on him. “But they all revolve around Cincinnati. My heart and soul are here in the great Midwest. To me, this is the cradle of American musical culture.”

By now, we have come to understand that JMR has affection and appreciation for many, many different types of music. But how will that eclectic taste manifest itself on the Music Hall stage? Or the Brady Music Center? Or any of the other dozens of venues where we might just bump into JMR and his musicians?

“Can I predict the future?” says Russell. “No. I wish I could. But I can tell you this much. When we think about what the Pops is going to be in the future, we want to be the voice of the people. This is music for everyone. And there are still many musical food groups that the Pops has yet to jump into. My great thrill is the thrill of discovery. If it sounds good, it is good. We are going to find fantastic artists, in our local community across the country and around the world. We are going to find the voice of music-making of all kinds. And we are going to embrace it with our
Orchestra. Our time has come.”