As concert titles go, this one is pretty straightforward: “Langrée Conducts Beethoven.” And indeed, on March 30 and 31, Music Director Louis Langrée conducts the Cincinnati Symphony Orchestra (CSO) in performances of Ludwig van Beethoven’s Symphony No. 2. But Langrée wants audiences to understand that this is just one part of a much larger project.

The CSO is in the second year of a three-season cycle dubbed the “Beethoven Revolution,” in which the Orchestra, under Langrée’s baton, performs all nine Beethoven symphonies and explores the revolutionary influence of Beethoven over 200 years of music making. The composer’s Symphony No. 2 marks the sixth performed so far in the cycle—the final three are slated for next season (2019–20) and encompass symphonies nos. 5, 6 and 8.

So, as Lucy van Pelt asks Schroeder in Peanuts, “What’s so great about Beethoven?”

Quite a lot according to Langrée.

“Beethoven definitely changed the history of music and the history of symphonic music,” says Langrée. “Composers were paralyzed after him. Where to go next? People were lost.”

Beethoven was born during Western music’s Classical period, roughly 1750 to 1820, when classical tenets dictated musical compositions. Beethoven studied in Vienna under Franz Joseph Haydn, and he initially applied the compositional techniques of the Classical period. But Beethoven gradually separated his compositions from this legacy, and his musical originality ushered in the Age of Romanticism, when art, literature and music were categorized by emotion, imagination and “wildness” over rationality, formalism and discipline.

For many, his Second Symphony, composed in 1802, begins to hint at that originality. But his Ninth and final symphony—performed by the CSO and May Festival Chorus this past fall and popularly recognized by the “Ode to Joy” choral passage—really epitomizes the revolutionary nature of Beethoven’s symphonic pieces, on several levels. According to Langrée, it was the work that changed music in the 19th century.

Louis Langrée displays the score for Beethoven’s Symphony No. 9 after a November 2018 performance of the piece.

“There is a chorus, which means that there are words in this symphony; which means the message of this piece is not only a musical message,” says Langrée. “Literature, music, philosophy are all united [in Beethoven’s composition] to elevate the listener.”

By comparing Beethoven’s music to what came before, we can begin to understand why his music is considered revolutionary—even today—and continues to inspire and influence composers and musicians. To illustrate this, each of the “Beethoven Revolution” concerts juxtaposes newer works and, in some instances, brand new commissions.

The CSO commissioned Composer-in-Residence Jonathan Bailey Holland to write a piece to accompany Beethoven’s Symphony No. 9—no easy feat! But Holland took up the challenge and composed Ode, which premiered at Music Hall this past November. 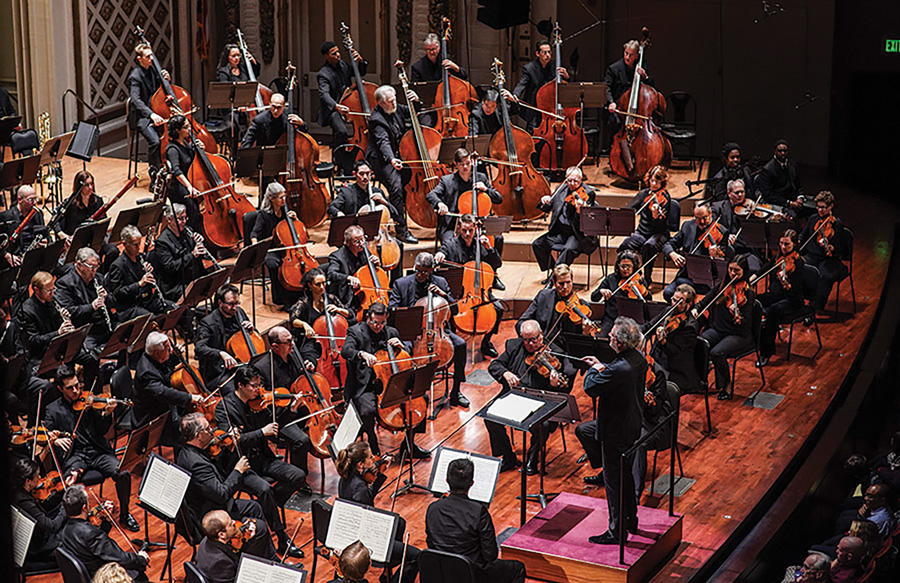 “Ode is a ‘meditation on/conversation with/prelude/postlude/reckoning with’ the idea of writing a work to accompany Beethoven’s Ninth Symphony,” said Holland.

“Beethoven, still, is haunting for musicians and composers,” says Langrée. “I wanted to pair his symphonies with pieces from the 20th and 21st centuries. We commissioned a piece by Pierre Jalbert [Passage, which was performed as a world premiere in April 2018] to see how he would respond to Beethoven’s Fourth symphony.”

Said Jalbert, “In my work Passage, the title refers to the transformation of musical passages from Beethoven’s Fourth Symphony, which informed this work, into a modern musical language, and of the passage of time between 1806, the year of Beethoven’s composition, and 2018.”
The March 30 and 31 program pairs Beethoven’s Symphony No. 2 with Prokofiev’s Violin Concerto No. 2 and Holland’s Halcyon Sun, which the CSO commissioned and premiered in 2003.

“Presenting world premieres helps us not to forget that Beethoven composed revolutionary music, which was contemporary music,” continues Langrée. “And many people didn’t understand where he would lead music. Some academic composers thought he was a hooligan, destroying the rules—the sacrosanct rules. He was changing the rules and inventing new ones and opening the path to the future of music.”

All the more reason to perform all nine of Beethoven’s symphonies along with new works by modern and contemporary composers. Following Symphony No. 2, Langrée and the CSO will perform more Beethoven in May, including the Emperor Concerto with acclaimed pianist Daniil Trifonov.
The Akademie 1808 concert program, part of the CSO’s 125th Anniversary season next year, caps this Beethoven exploration.

“The Beethoven Akademie event is a recreation of the most important concert of Beethoven’s life, when the composer premiered his Fifth and Sixth symphonies, his Fourth Piano Concerto, and Choral Fantasy, among other theatrical and sacred works,” said Langrée.