Clearly, Gupton is a man given to understatement. For most of us, 2020 has been a year filled with anxiety and frustration and endless disappointments.

Gupton has had his share of those things, too, including a debut conducting gig with the Los Angeles Philharmonic that was scheduled for March 14 in Walt Disney Concert Hall.

“And then the world shut down,” he says, sighing deeply. It’s more a sigh of resignation than it is of aggravation. At 47, Gupton is wise enough to understand the difference between career disasters and unfortunate bumps in the road. He is far from feeling beaten by all of this.

Ask him what he’s up to at the moment and he’s quick to answer—“dreaming.”

It’s a healthy attitude, particularly in a time when the unknown is so very pervasive. Besides,

Cincinnati Pops audiences will get to see Gupton in the very near future. He appears in the free October 31 streaming concert, celebrating both Halloween and Dia de los Muertes. He won’t be there as a conductor, though. Rather, he will narrate the world premiere performance of James Stephenson III’s The Legend of Sleepy Hollow.

He’s also been a busy man. For much of the past 20 years, Gupton’s career has been something of a tug of war between theater and conducting. Since moving to Los Angeles in 2010, the Detroit native has worked almost steadily as an actor, appearing in Criminal Minds, Black Lightning, Prime Suspect and others, both on television and in feature films.

But much to the chagrin of television casting directors, orchestras are every bit as interested in him, leading to performances from San Francisco to Monte Carlo, from Mexico City to Washington, DC. 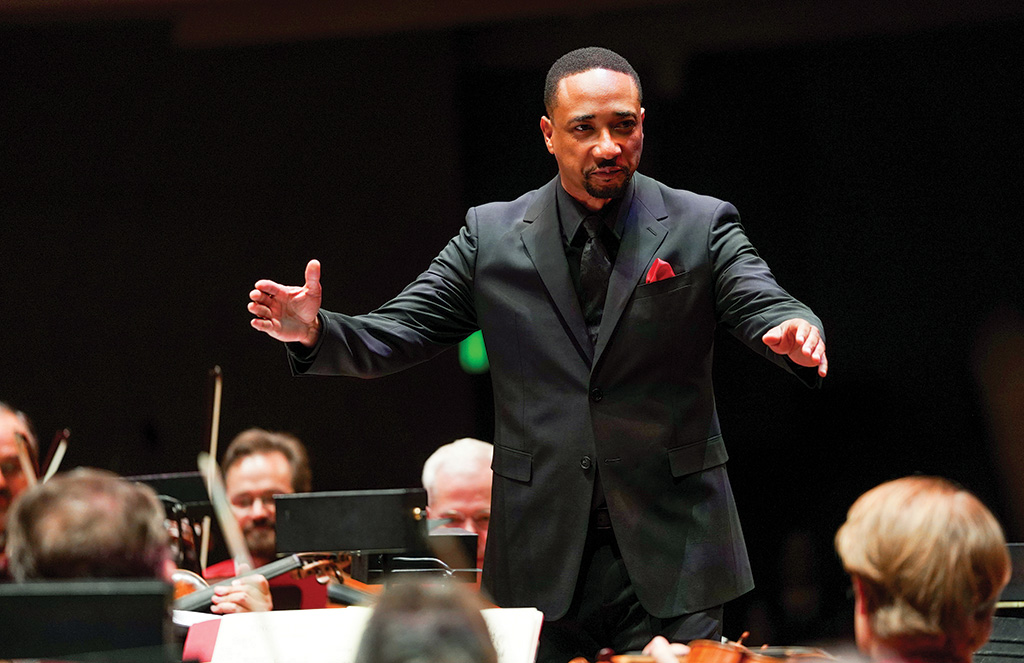 “One of the challenges of doing the two things is convincing prominent people in both endeavors that both disciplines are as valuable as one another.” He starts an anecdote, but then thinks better of it. No need to ruffle well-placed feathers. Especially ones that might be inclined to hire you again.

“Let’s just say that convincing great classical teachers who have benefited my career and my life that ‘no, I really need to do this guest spot on Aaron Sorkin’s Newsroom’ can make some people pretty prickly.”

He has persevered, though, and has continued to find success in both fields, driven both by his personal ambition and by the knowledge of what impact it can have on people—particularly young people—to see a Black man playing a professional onscreen or standing in front of an orchestra.

“I remember as a child opening up Ebony magazine and seeing Michael Morgan and Isaiah Jackson and James DePreist,” he says, clearly still excited about the memory of seeing African American conductors achieving such widespread fame. “I’m still seeing these people in my mind. Later, I would go to Orchestra Hall (in Detroit) and see Leslie Dunner leading this group of musicians. I know that sort of thing may not touch everyone. But for some people—including me—it was everything. So I understand what it means when that little African American child comes up after the Empire Strikes Back concert and hugs me.”

It’s scenes like this he never imagined when he went to the University of Michigan to study conducting. Back then, the goal was to return to Detroit to teach music and lead a high school orchestra.

But things have a way of changing. A graduate degree from Juilliard and a couple of notable Broadway gigs later and he has the best of both worlds, and he notes his gratitude to be working with the Pops and the CSO: “It’s an organization that clearly understands my professional duality and embraces it.”

“I still fantasize, though,” he says. “My girlfriend Meaghan (Boeing) and I dream about starting the Bora Bora Tchaikovsky and Shakespeare Festival. We took a trip there and ever since we got back, we have this need to return. But this time, we’d do it with great musicians and great actors. Not this year. But maybe someday.”