For 125 years, the Cincinnati Symphony Orchestra (CSO) has afforded audiences the opportunity to witness some of the world’s greatest conductors in action as its Music Directors, with Leopold Stokowski, Fritz Reiner, Eugene Goossens, Thomas Schippers, Jesús López-Cobos, Paavo Järvi and Louis Langrée among the 13 who have held the title. This month we recall Max Rudolf, the ensemble’s beloved eighth Music Director, for his work both on and off the stage. 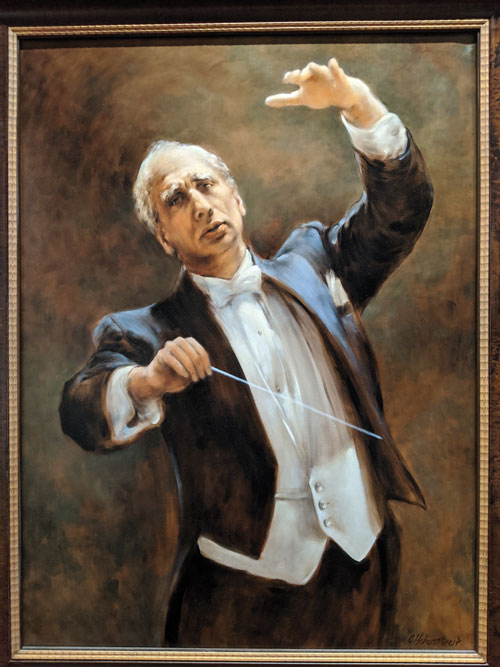 Rudolf was among the most prolific conductors of the 20th century. After conducting for many years in his native Germany, he came to the United States and served as Artistic Administrator of The Metropolitan Opera before writing a highly regarded conducting text, The Grammar of Conducting (New York, 1950). In 1958, Rudolf accepted the position of Music Director for the Cincinnati Symphony Orchestra.

From the beginning, it was Rudolf’s goal to expand the Orchestra. During his tenure he increased the musicians’ pay scale, lengthened the concert season, expanded Young People’s Concerts, formed the Cincinnati Symphony Youth Orchestra (CSYO), and traveled with the CSO on its first world tour in 1966.

While the Orchestra performed Young People’s Concerts as early as 1920, Rudolf developed the children’s concerts into formal series known as Kinderkonzerts and In-School Concerts. Today, Young People’s Concerts reach more than 18,000 students who learn, enjoy and interact with music through 60-minute orchestral performances. Rudolf, who taught music until his retirement, expanded student access even further when he formed the Cincinnati Symphony Youth Orchestra (then called the Cincinnati Youth Symphony Orchestra) in 1964 with area music educators, after discovering young musicians needed serious orchestral training. Currently, the CSYO comprises two full 100-member orchestras, each with weekly rehearsals and five performances per year.

The highlight of Rudolf’s tenure happened in 1966 when the CSO embarked on a 10-week world tour, the first State Department-sponsored world tour by an American orchestra. The ensemble traveled to 15 countries, including stops in Jerusalem, Bombay, Hong Kong and Lebanon, and performed for more than 100,000 people over the course of 42 concerts. In addition to standard works such as Beethoven’s Symphony No. 3, Brahms’ Symphony No. 4 and Dvořák’s Symphony No. 9, tour repertoire included Gershwin’s Piano Concerto in F, William Schuman’s New England Triptych, Paul Creston’s Symphony No. 2, and Peter Mennin’s Canto for Orchestra. Rudolf and the CSO later recorded several works from these tour programs.

Pianist Lorin Hollander, who Rudolf featured as the tour’s piano soloist, explained in an archived “CSO on Tour” interview that the tour was not without challenges. A malfunctioning airplane with almost the entire ensemble on the flight turned one planned performance into a piano recital. On more than one occasion, airline workers left instrument cases in the sun, causing, in one instance, the finish on a double bass to melt. Despite the challenges, Hollander recalled that playing wonderful music was ultimately the most important thing for him and the other musicians.

“The commitment to beauty, the perfection of balance, the essence of the composer, the opening of expressive depths of soul—that’s what it was about,” Hollander noted. “I remember intense exhilaration. To be with endlessly different audiences and to express that deep level of personal involvement—I learned anew on that tour as a young man that is what the role of an artist is.”

Max Rudolf concluded his tenure as Music Director of the CSO with a European tour in the spring of 1969. Since then, the CSO has traveled abroad on 24 tours.