The Cincinnati Symphony Orchestra: Celebrating 125 Years and Building on the Three I's

Throughout its history, the Cincinnati Symphony Orchestra (CSO) has expressed these three foundational values in different ways and, today, aspires to promote them even further as the Orchestra celebrates its 125th year. These principles are the legacy of previous generations who made the CSO what it is now in the 21st century. 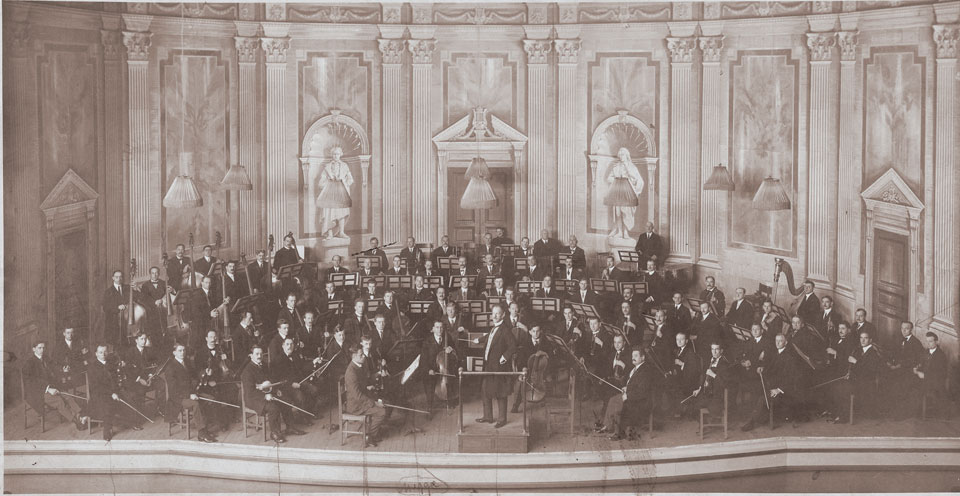 “The CSO’s newly articulated vision is to be the most relevant orchestra in America,” wrote CSO President Jonathan Martin in an essay for the September 2019 issue of Fanfare Cincinnati. “And building on a foundation of increasing artistic excellence, we identified three values fundamental to this vision: to be inspiring, innovative and inclusive.”

The details of what the “three I’s” mean for the CSO today—and for its future—are presented in the commemorative “CSO 125” insert located inside this issue of Fanfare. But how were these fundamental values expressed in the past? Who promoted them? And why are they still important to this iconic Cincinnati arts institution?

Music, like all the arts, inspires us. And in 1891, a love of music and a desire to bring the best performers in the world to our community inspired 15 Cincinnati women to form the Ladies Musical Club. Together, they raised $10,000 to present the Boston Symphony Orchestra in Cincinnati. Four years later, these same women—joined by 13 additional women and five men—incorporated the Cincinnati Symphony Association Company. (This was three decades before women won the right to vote!)

But the nascence of the CSO didn’t happen in a vacuum. Throughout the 1800s, many new Cincinnatians brought classical music traditions to our city as they emigrated from Europe. Cincinnati’s choral tradition led to the founding of the May Festival in 1873 and the construction of Music Hall a few years later. By the 1890s, the city’s music scene was thriving, and Cincinnati was ready for a permanent orchestra.

The CSO’s first concert took place on January 17, 1895, at Pike’s Opera House under the baton of Frank Van der Stucken. In the years that followed, the Orchestra and its conductors collaborated with many composers and guest artists—from Richard Strauss to Camille Saint-Saëns, Sergei Rachmaninoff to Enrico Caruso—inspiring audiences and supporters along the way.

Seeking to create a lasting legacy, patrons such as Cora Dow (1868–1915)—the renowned pharmacist and owner of the Dow pharmacy chain—donated the equivalent (in today’s currency) of $16 million to the CSO. Her act of generosity, as well as the generosity of many others, ensured that generations of Cincinnatians could enjoy—and be inspired by—Cincinnati’s hometown orchestra.

By definition, the classics are timeless, and orchestras make their reputations by how they interpret and perform works from the classical canon. But music is also constantly evolving, and over the years the CSO has innovated, both artistically and technically.

An early example combining technical and artistic innovation took place on a concert tour of the East Coast in 1917 (which included a performance at New York’s Carnegie Hall). Under the baton of Music Director Ernst Kunwald, the CSO recorded its first album at the Columbia Gramophone Company Studios in New York City. A giant horn captured the sound of the musicians playing “Waltz of the Hours” from Delibes’ Coppélia ballet in addition to other works. Only two other American orchestras had made recordings at that time: the Chicago Symphony Orchestra and the New York Philharmonic. (Read more about the CSO’s recording history in RaeNosa Onwumelu’s article “The Orchestra’s First Album” in this issue of Fanfare.)

A few years later, in November 1921, the CSO became the first orchestra to broadcast live over the airwaves. Wisconsin’s 9XM carried a performance by the ensemble from the University of Wisconsin Armory in Madison, using just a single microphone. Led by CSO Music Director Eugène Ysaÿe, the broadcast could be heard as far away as New York, and newspapers reported that even President Warren Harding, an Ohioan, tuned in to hear the Orchestra play. Today, the Orchestra continues to reach millions of listeners across the country, and around the world, through national radio broadcasts and online streaming—the next innovation in this field.

In addition to embracing technical advancements, the CSO has also innovated artistically. The 1920s saw collaborations by the Orchestra with musical innovators such as Igor Stravinsky, Béla Bartók and George Gershwin. Gershwin made his CSO debut in 1927 as a guest pianist performing his own composition, Rhapsody in Blue. He later returned to Cincinnati in 1929, bringing his taxi horns and overseeing the second-ever public performance of An American in Paris at the Emery Theatre. Almost nine decades later, in 2017, the CSO and Louis Langrée were instrumental in the creation of the new critical edition of An American in Paris, the official restoration of Gershwin’s score back to the original manuscript. Not only did the Orchestra give the world premiere of the new edition—at La Seine Musicale in Paris in 2017—they also recorded two versions of it for their latest recording, Transatlantic, which was nominated for a Grammy® Award in the category “Best Orchestral Performance” in 2019. 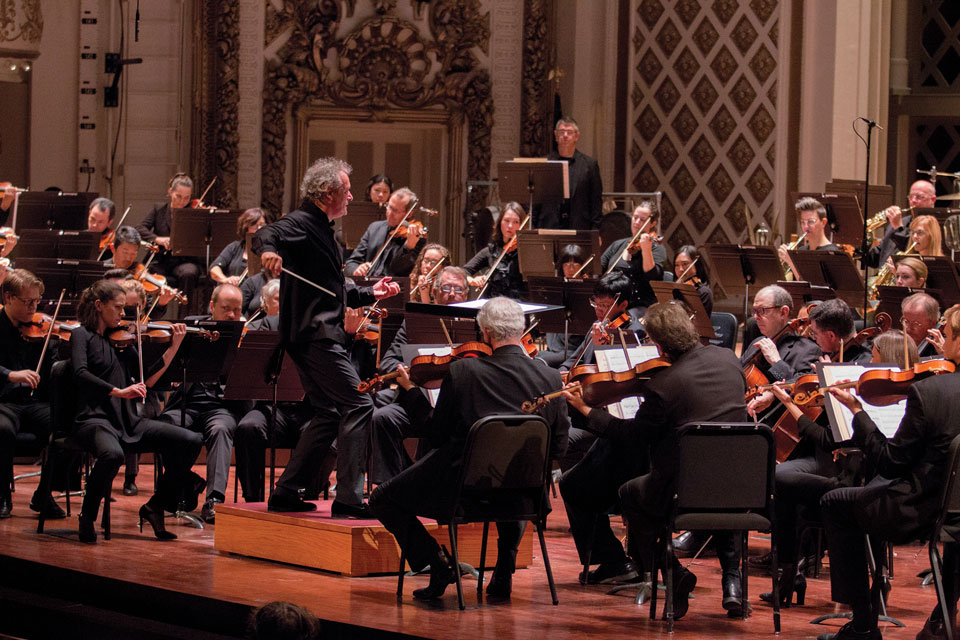 This is not the first time the CSO has premiered a work that became an important addition to the orchestral canon: in 1942, the CSO gave the world premiere of Aaron Copland’s Lincoln Portrait, with guest conductor Andre Kostelanetz on the podium. Other examples include the American premiere of Richard Strauss’ An Alpine Symphony (in 1916) and the world premiere of Respighi’s orchestration of Bach’s Prelude and Fugue in D-minor (in 1930). Recently, the CSO was honored to present the world premiere of the final work by Pulitzer Prize-winning composer Christopher Rouse, his Symphony No. 6, which was commissioned by the CSO for its 125th anniversary.

Orchestras have generally not made diversity and inclusion priorities. But that perception—and reality—changed over the years and continues to evolve today. The CSO was founded by prominent Cincinnatians for their own enjoyment, and for the enjoyment of those who had the leisure time and disposable income to attend performances. The programming in the early years reflected this exclusivity by presenting mostly classic works of high European culture written by and for—with few exceptions—white people of a certain socio-economic status.

But things slowly started to change in the 1930s, 40s, and 50s as the CSO began to incorporate music composed by African Americans and inspired by African-American culture. During the 1937 May Festival, the Orchestra under the baton of CSO and May Festival Music Director Eugene Goossens gave the world premiere of Robert Nathaniel Dett’s oratorio, The Ordering of Moses, at Music Hall. NBC radio broadcast the performance live over the airwaves to a national audience, but the broadcast was abruptly stopped midway following racially motivated complaints about Dett, a Canadian-American of African ancestry.

In 1952, CSO Music Director Thor Johnson invited celebrated contralto Marian Anderson to perform with the Orchestra for the first time, and she returned to Cincinnati in 1954 for an encore performance. These concerts took place after Anderson had been barred, in 1939, from performing to an integrated audience at DAR Constitution Hall in D.C. With the backing of Eleanor Roosevelt, Anderson gave her famous recital to an audience of 75,000 on the Washington Mall and millions of people nationally over the airwaves.

By the 1960s, African-American artists performed regularly with the CSO. Jazz great Duke Ellington guest conducted a Popular Concert in 1966 and subsequently recorded an album of orchestral works with Erich Kunzel and the CSO in 1970. The recording included orchestral versions of Ellington works that are now jazz standards: New World A-Comin’, Harlem, and The Golden Broom and the Green Apple.

This season, MAC celebrates its 30th anniversary—in conjunction with the Orchestra’s 125th anniversary—through a series of CSO concerts featuring diverse guest conductors, guest artists and musical programming. The shared goal is to be truly inclusive, reflecting the demographics of the city both onstage and in the audience.

As the women’s liberation movement also gained momentum over the last half-century, the glass ceiling shattered one pane at a time in the orchestral world. Sarah Caldwell became the first woman to guest conduct the CSO in 1977, and later, in 2002, Sarah Ioannides became the Orchestra’s first female Assistant Conductor. Today, women conductors are more frequently seen on the podium—from Simone Young to Eun Sun Kim to Xian Zhang—and in 2019 the CSO announced the Orchestra’s first female concertmaster, Stefani Matsuo, who provides leadership for the entire ensemble. Partnering with the University of Cincinnati’s College-Conservatory of Music (CCM), the CSO created the Diversity Fellowship in 2016 to mentor orchestral musicians from African-American, Latinx, and Native American backgrounds. Through this initiative, the CSO and CCM are working with the Andrew W. Mellon Foundation, to remove barriers and ensure that every voice is heard.

Looking toward the future, the CSO will continue to rely on the “three I’s” to be “the most relevant orchestra in America.” The foundational values of inspiration, innovation and inclusion form a legacy that will guide the CSO—its conductors, composers, musicians, staff, supporters and audiences—through its next 125 years to achieve artistic excellence.