Flutronix wanted their next project to celebrate Black women.
What grew from that seed exceeded their wildest imagination.

Black Being begins the moment people step into the performance space, but it can’t continue until they actually start listening. As attendees fill in, they’re greeted by an undulating flute aspiration playing on loop. It crescendos, imperceptibly at first, until all pre-concert chitchat is drowned out by its lapping waves. 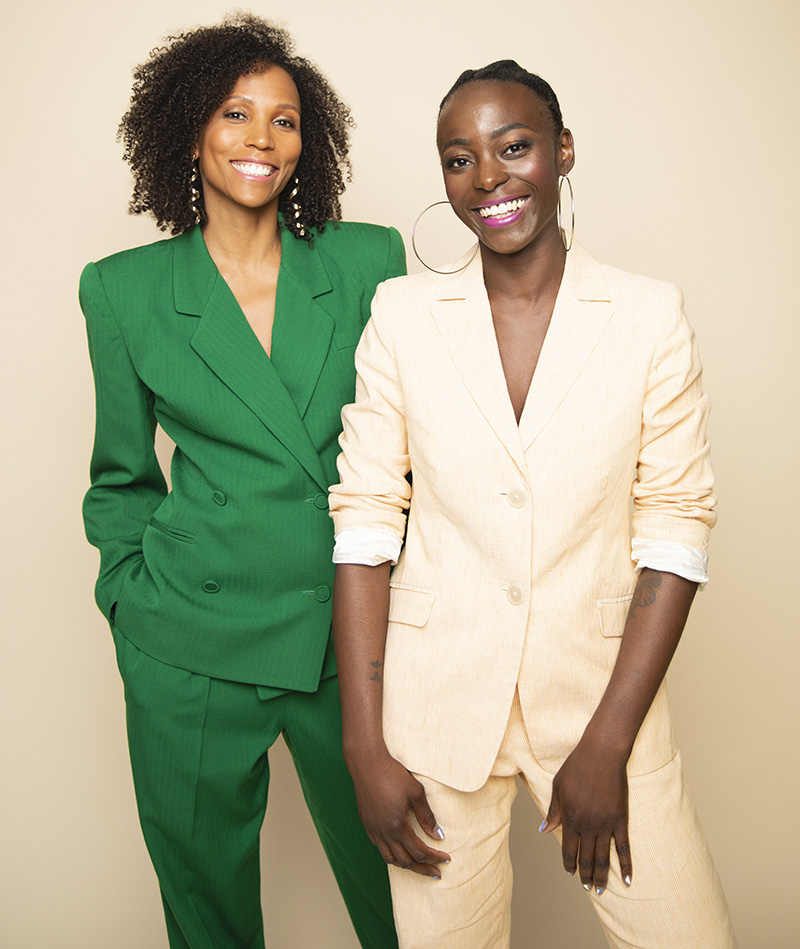 That moment encapsulates exactly what Nathalie Joachim and Allison Loggins-Hull—who perform together as Flutronix—aim to do with Black Being: reclaim the time, respect, and agency so frequently denied Black women. Through a thrumming electroacoustic soundscape and an epic, evocative text by North Carolina poet laureate Jaki Shelton Green, Joachim and Loggins-Hull share facets of their life they would otherwise never have imagined sharing in a classical concert setting: They play beans and rice like chamber music, reminiscent of Joachim’s long afternoons spent washing rice on the porch with her family in Haiti. They allow their bodies to slacken and rest, paper fans popping like the Baptist church ladies from Loggins-Hull’s youth. They command a roomful of people to transport themselves to the bloodstained hull of a slave ship….

Of Green’s poem, Loggins-Hull says, “The imagery is just so vivid. Reading it, I see the Middle Passage immediately, or I see those warm summer days. That’s my absolute favorite thing about this work: It’s just so true to, like, everything. It connects us all in this way that can’t even really be explained.” 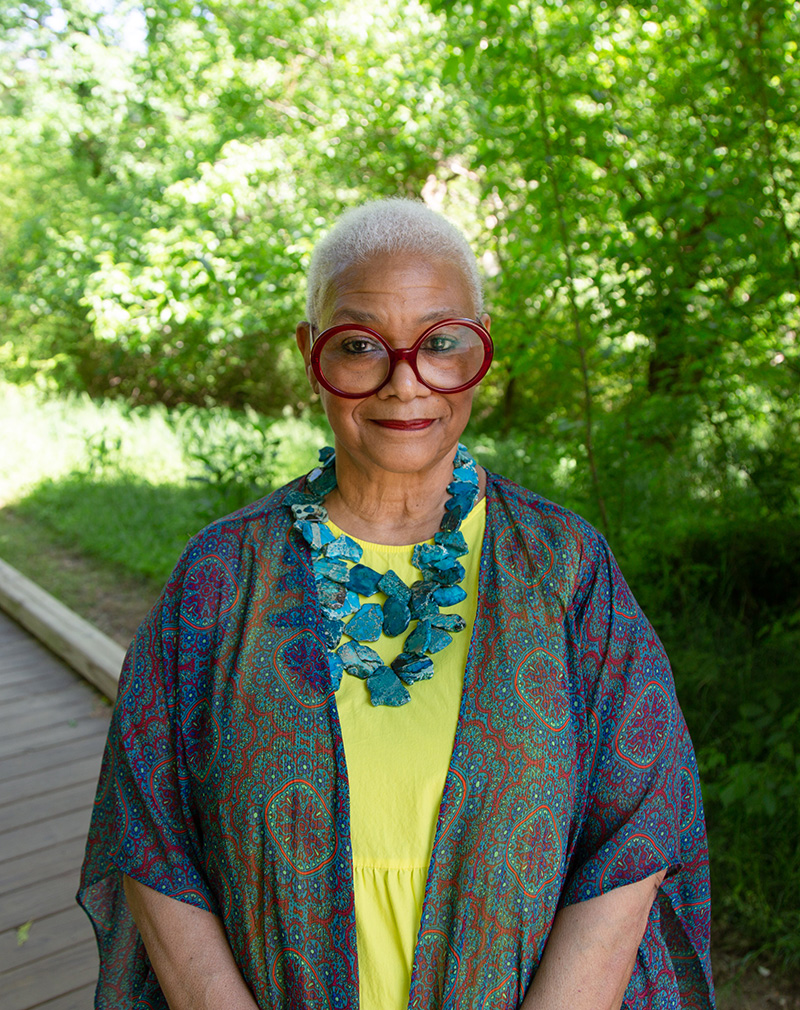 When Flutronix reflected on the experience of expanding Black Being for the Cincinnati Symphony Orchestra from their respective homes earlier this year—Joachim in Chicago, Loggins-Hull in Montclair, New Jersey—they were still reeling from the thunderous premiere of the piece’s small-scale version in October 2021 at the Arts Club of Chicago, which co-commissioned the work alongside the CSO. Then, in February 2022, Joachim and Loggins-Hull returned to the University of North Carolina, Chapel Hill to present the Covid-delayed culmination of a two-year residency (that began in 2018) at Carolina Performing Arts.

Black Being owes its existence to that residency: Flutronix’s time in North Carolina introduced them to Green’s poetry, which Joachim later set to music in her Blood Sister (2019) for treble choir and viola. The poem Joachim set, “Revelations” (published in Green’s 1983 collection Dead on Arrival), taps into the many themes which course through Green’s work as a whole: sisterhood, generationalism, living history, slippages of time and place. But when Flutronix tapped Green to write a poem specifically about Black women for Black Being, the state poet laureate admitted she was daunted by the task.

After receiving Green’s text—and absorbing it, which was quite another task altogether (“I opened up the email, then I had to sit at my desk in silence for a while,” Joachim remembers)—Flutronix outlined the poem’s narrative arc by segmenting it into four chapters. The first, “Angels,” groans with that weight Green describes—the flute loop and Joachim’s vocoder [a type of voice synthesizer] recitations immediately launch listeners into the terror and confusion of human bondage. That pivots with “Water Babies,” which flips on its head the harrowing imagery of people being thrown from slave ships.

“Up to that point, [Jaki is] laying out all the activity that got us to that point, but then you move into this beautiful space. It’s another way of thinking about birth: We keep emerging from these beautiful nothings,” Joachim says.

“Water Babies” lays the foundation for “Moon Pies and Stardust,” Black Being’s nostalgic third section, which glows gold-green with memories treasured not for the activities therein, but rather the simple pleasure of sharing space with loved ones. (In Loggins-Hull’s words, “it’s leisure, it’s ease, it’s some sweet hammock lifestyle.”) By the time we reach “Black Lights,” Black Being’s iterative final section, the weight from the exposition is less shrugged off than defiantly hurled. Its unspooling enumeration of people, places and things—both by inclusion and by negation—affirms the richness of Black womanhood across continents, class, appearance, era and experience.

“So often, we get stuck into tropes of only being allowed to be this or that kind of Black person. What’s radical about this piece is that it acknowledges our universality without making us this monolith,” Joachim says.

Black Being’s Chicago premiere featured only Joachim and Loggins-Hull onstage, performing on flute and at various digital audio workstations set up on stage. The CSO performance of the piece adapts the work for chamber orchestra in a much larger space. Although Joachim hopes both versions of Black Being will be taken up by presenters in years to come, she believes its orchestral version packs a special punch, particularly at organizations where narratives like Black Being’s rarely, if ever, make it to the stage.

“You have two Black women surrounded by predominantly white bodies and a conductor. For us to be able to really claim that space means something very different,” Joachim says.

The title “Black Being” is similarly multivalent: “Being” could be interpreted as a noun, a verb, a gerund. Joachim and Loggins-Hull, who named the piece, said such ambiguity was wholly intentional. As Black Being eloquently attests, there are many ways to be a Black woman. And it’s enough—revelatory, even—to simply be, like that quietly radical moment of rest in “Moon Pies and Stardust.”

“The fact that we exist is a revolution,” Green says. “When young people started talking about Black joy as resistance, I thought, ‘Yeah.’ Every day that I see a Black child laugh, smile, or ride down the street eating ice cream is a declaration of nowness—of being here, now. I know that we are all our ancestors’ wildest dreams.”

The CSO presents CSO Proof: Black Being, featuring Flutronix, on April 14 at 8 pm in the Music Hall Ballroom.