HOMUNCULUS C.F. for Percussion Ensemble, with Harp and Piano

“Homunculus, C.F., for Percussion Ensemble, with Harp and Piano was composed in Akron, Ohio, during the summer of 1960 in my apartment situated on the top floor of my father's (physician and surgeon) office, equipped with all the necessary facilities except a piano. These clinical surroundings evoked memories of the medieval laboratory where Wagner, youthful apprentice to Faust, made a successful alchemy experiment, fashioning and bringing to life a creature he called homunculus. Having selected percussion instruments for my formulae, then maneuvering and distilling them by means of the Chord of the Fifteenth (C.F.), this musical test tube baby was brought to life. The chord of the fifteenth was created from a succession of superimposed thirds:

This is the first CSO performance of Homunculus C.F. 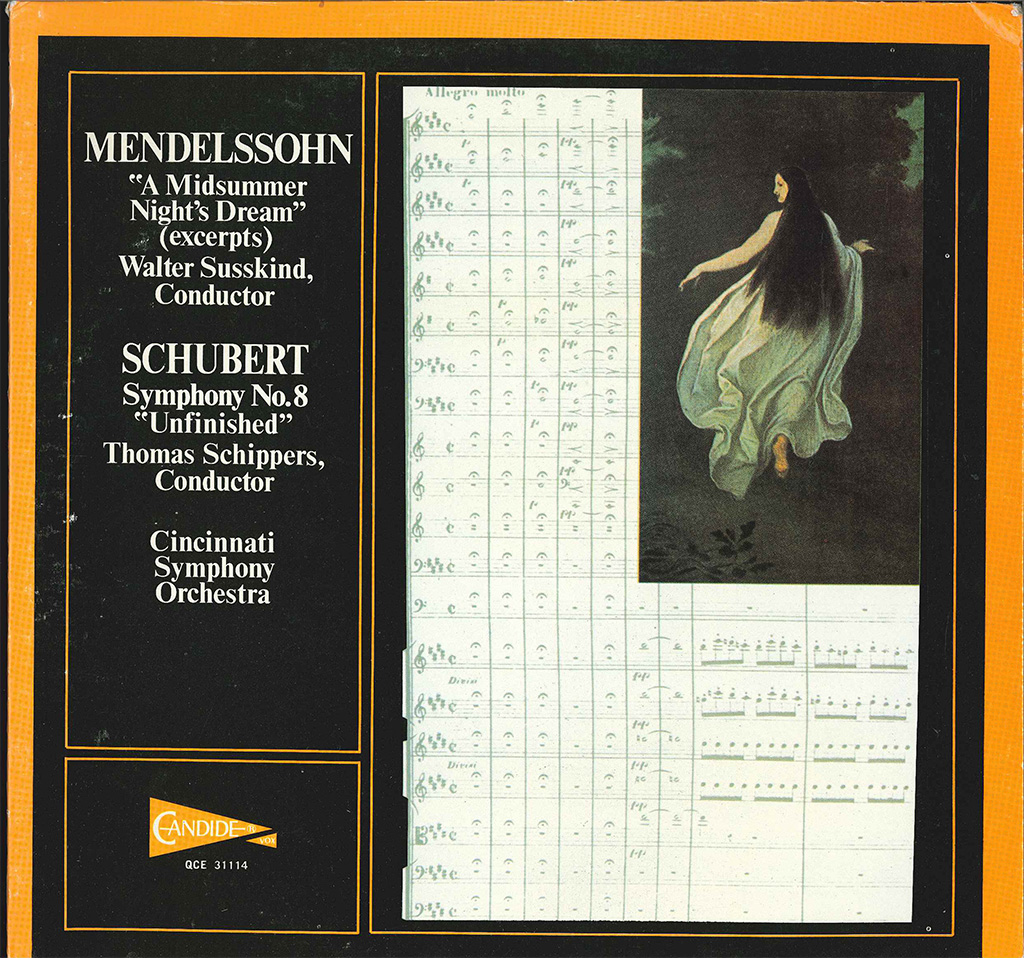 The Unfinished Symphony was begun on October 30, 1822. By November of that year, the composer had completed two movements and started a third. He never completed the piece. Johann Herbeck conducted the first performance, in Vienna, on December 17, 1865.

CSO annotator Jonathan Kramer wrote: “There has been a lot of speculation on why Schubert never finished the piece and why he never mentioned it, not even to his brother Ferdinand, who was compiling a complete list of Schubert’s works. It has been suggested that the symphony really is complete in two movements. But, if so, why did Schubert sketch a scherzo, and why are the two movements in different keys? Perhaps Schubert simply lost interest in the project. Or perhaps he found he could not write a third movement that lived up to the first two. It has even been proposed that he did in fact complete the work but that the Hüttenbrenners [brothers to whom Schubert gave the score, which he had hoped would be passed along by them to the Styrian Music Society] lost half of it.

“The Unfinished Symphony contains some of the most beautiful music ever composed, and it surely deserves the popularity it has earned in its two-movement state. Schubert was a supreme lyricist: witness the second theme of the first movement, one of the great tunes of all times. But he had trouble with large forms. He admired the symphonic drama that Beethoven had achieved, but his own development sections tend to be rambling and discursive. His melodic inventiveness all but makes up for this deficiency in most of his extended pieces. The B Minor Symphony, almost uniquely among his compositions, does not suffer from formal weaknesses. It is taut, dramatic and logical. Both its poignant first movement and its bittersweet second are as well integrated and well paced as any of Beethoven’s masterpieces.

“The first movement contains a wealth of melodies. Even as the music grows from the depths, it is melodic from the beginning. The first idea, in cellos and basses alone, is destined to become important subsequently. Soon the violins enter with a second melody, followed by a poignantly songful theme in the oboe and clarinet. These three ideas constitute the first theme group. Despite their deep beauty and lyricism, they pale in comparison to the second theme, which begins in the cellos.

“The overriding lyricism of the first movement is maintained in the second, which is based on two lovely melodies. The first is heard at the outset in the violins, and the second comes later in the clarinet. The pathos in the second theme is reminiscent of the first movement. The two themes alternate throughout the movement. The coda features a delicately slow-moving line for unaccompanied violins alternating with winds.”

CSO Performance History: The Orchestra has performed the Unfinished Symphony No. 8 on 35 CSO Subscription weekends, starting with the February 1895 performance at the Pike Opera House, Anton Seidl conducting. The Orchestra also performed the work during its 1995 European tour, Jesús López Cobos conducting, as well as on several regional and national stages. The most recent subscription performance was October 2010 at Music Hall, James Gaffigan conducting.

The Orchestra recorded Schubert’s Unfinished Symphony No. 8 under the baton of Music Director Thomas Schippers in 1976 (Vox Candide QCE 31114, rereleased in 1995 as VoxBox CDX 5138). The recording also included the Overture, Scherzo, Nocturne and Wedding March from Mendelssohn’s A Midsummer Night’s Dream, conducted by Walter Susskind.

YOU HAVE THE RIGHT TO REMAIN SILENT

You Have the Right to Remain Silent was written in 2007 for clarinetist J.D. Parran with realtime processing by Earl Howard on the Kurzweil. Parran and the Perspectives Ensemble premiered the work at New York’s Miller Theatre in 2007. Anthony Davis wrote:

“You Have the Right to Remain Silent, for solo clarinet, Kurzweil and chamber ensemble, takes its inspiration from the Miranda warning. The piece was conceived as a concerto for clarinetist J.D. Parran with realtime processing by Earl Howard on the Kurzweil. I tried to approach ‘Silence’ as, rather than John Cage’s apolitical world of ‘white privilege,’ a much more dangerous space. In the first movement, ‘Interrogation,’ I imagined the clarinet being interrogated by the orchestra as the orchestra utters ‘You have the right to remain silent.’ In the second movement, ‘Loss,’ a phasing texture slowly emerges as the orchestration gains momentum through metric modulation, setting up an improvised duet with the contra-alto clarinet and the Kurzweil. This section concludes with an homage to Charles Mingus with a melodic variation for the contra-alto clarinet in F minor that starts as a dirge and ends in swing. The third movement, ‘Incarceration,’ involves the percussion, with more text from the Miranda in contrast to the clarinet and Kurzweil. I have always been fascinated by the relationship of speech to rhythm, from Sprechstimme to hip-hop. The Kurzweil processes both the clarinet and the percussion. The final movement, ‘Dance of the Other,’ begins with a rather simple melody that suggests the fantasy of otherness.”

This is the first CSO performance of You Have the Right to Remain Silent.