Concerto No. 5 in F Major for Piano and Orchestra, Op. 103. Egyptian

L’enfant et les sortilèges (“The Child and the Sorceries”)

In December 1906 the CSO welcomed the great French composer and pianist Camille Saint-Saëns to perform his own music. Originally the program included the audience favorite Piano Concerto No. 2, but Saint-Saëns opted to play Piano Concerto No. 5, Egyptian. His visit to Cincinnati was an historic event that drew a record audience to the CSO. In this 125th anniversary season, it only seems fitting to bring this historic event to life once again. This weekend we welcome back Jean-Yves Thibaudet, the ideal interpreter of this music with his elegant touch and stunning flair. He will take us on a sea voyage with sounds from the Middle East, Spain, Egypt and Java.

Concerto No. 5 in F Major for Piano and Orchestra, Op. 103, Egyptian 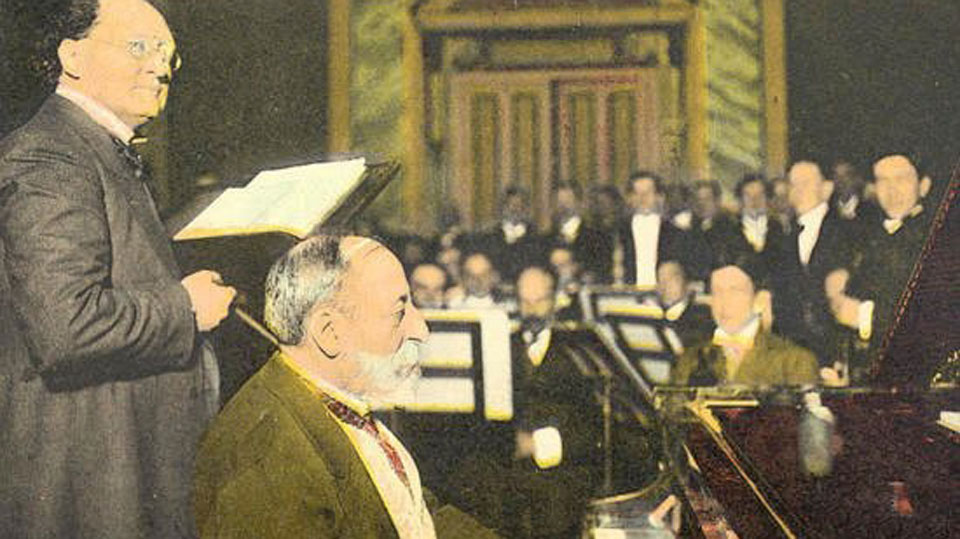 Camille Saint-Saëns climbed up onto the piano bench when he was two and spent a large part of the rest of his life there. At four-and-a-half, he played the piano part of a Beethoven violin sonata, and prodigiously made his formal debut in 1846, when he had ripened to the age of ten. As a teenager, he became organist at the Church of Saint-Merry in Paris; five years later, he moved to the prestigious post at the Church of the Madeleine. His artistry (and later his compositions) gained the respect of Liszt, who performed and conducted several of Saint-Saëns’ important scores in Germany. (Liszt oversaw the premiere of Samson et Dalila, in Weimar in 1877.) Berlioz said of him that “he is an absolutely shattering master-pianist.” He impressed even the redoubtable Richard Wagner by playing Tristan und Isolde from memory at the piano. Saint-Saëns was so constantly in demand throughout his life as a pianist in his own and other composers’ works, especially those of Mozart and Beethoven, that he religiously practiced for two hours each morning, an activity he continued, literally, until the day he died.

To perform, of course, meant to tour, and travel became one of Saint-Saëns’ chief pastimes. He went to the corners of the earth, from Singapore to San Francisco, but he tried to spend his winters in the baking sun and relative anonymity of Algiers, away from the drab Parisian weather. His fondness for North Africa carried him on at least two occasions to Egypt, each visit inspiring from him a work for piano and orchestra: Africa, of 1891, was based on native songs; the Fifth Piano Concerto (“Egyptian”) was composed at Luxor in 1896. The composer was the soloist in the premiere of the Concerto on June 2, 1896 in Paris at a concert celebrating the 50th anniversary of his debut as a pianist.

The F major Piano Concerto, despite its pictorial and atmospheric effects, exhibits the formal clarity and emotional restraint that characterize Saint-Saëns’ music. Of Saint-Saëns’ aesthetic, the French scholar Romain Rolland wrote, “He was not troubled by any sort of passion. Nothing disturbed the clearness of his reason.” In its form, harmony, orchestration and texture, the “Egyptian” Concerto is indebted to the Classical models of Mozart, a composer Saint-Saëns revered. The opening movement follows the traditional sonata-concerto structure, with a chordal main theme and a complementary, dance-like subordinate melody. “The second movement,” Saint-Saëns wrote, “takes us on a journey to the East and even, in one section, to the Far East. The G major passage is a Nubian love song that I heard sung by the boatmen on the Nile as I went down the river in a dahabieh.” The finale is a breathtaking tour-de-force of keyboard technique, proof that Saint-Saëns had lost none of his piano facility during the half-century of his performing career. Arthur Hervey, one of the composer’s early biographers, interpreted the incessant rhythmic motion of the finale as Saint-Saëns’ attempt “to describe his experiences on the sea voyage” home from Egypt. “A note of realism,” Hervey continues, “is introduced by the sound of the propeller, while the serenity of the voyage is interrupted by a short storm.” Storms, propellers and voyages there well may be, but the real point of this music is its dazzling display for the soloist in one of Saint-Saëns’ most breathtaking exercises in virtuosity.

L’enfant et les sortilèges (“The Child and the Sorceries”)

A French Literary Phenomenon
France loved Colette (1873–1954). For five decades, from the appearance in the first years of the 20th century of the four Claudine novels (the tales of an uninhibited teenage girl whose popularity inspired a musical stage play and a Claudine uniform, as well as Claudine soap and Claudine cigars and Claudine perfume) until her death in 1954 as the most honored female author in French history (Grand Officer of the Legion of Honor, member of the Belgian Academy of French Language and Literature, Honorary Associate of the American National Institute of Arts and Letters), Colette captivated the readers of her 50 books and numerous short stories with her precise and elegant prose, her passionate concern for the independently minded woman’s place within society, and her honest portrayal of sensuality, both amorous and in the natural world. She is best known in America for Gigi, her 1945 novel about a turn-of-the-20th-century Parisian cocotte who is transformed into an elegant lady, which was made into a French film in 1948, a Broadway play in 1954 (which made Audrey Hepburn a star), and an Oscar-winning Hollywood musical with a Lerner & Loewe score in 1958.

In 1916, during the darkest days of World War I, Jacques Rouché, director of the Paris Opéra, asked Colette to write a scenario for a fantasy opera or ballet, and within a week she had completed the libretto for L’enfant et les sortilèges (“The Child and the Sorceries”). Rouché suggested several possible composers to set the text, but none sparked her interest until the name of Maurice Ravel was mentioned. “I expressed my approval without reservation,” she recalled. Colette had met Ravel a decade earlier at the chic salon of Madame René de Saint-Marceaux, whose habitués included the crème de la crème of musical Paris—Fauré, Debussy, d’Indy, Hahn, Cortot, Viñes, Casals—where she remembered him for his small stature and his dandified dress, especially the “showy ties and frilly shirts.” No friendship formed between them, but during the intervening years, Ravel had earned a reputation as a meticulous and sensitive craftsman able to summon wondrous and fragrant worlds on stage—Mother Goose and Daphnis et Chloé had both premiered in 1912—and he seemed the perfect creative match for Colette’s evocative verses.

In 1916, Rouché sent a copy of Colette’s libretto to Verdun, where the delicate Ravel had been assigned to drive an ambulance in the war effort, but it failed to reach him; the impresario had better luck with a second copy the following year, shortly after Ravel had been discharged from military service for medical reasons. Ravel quickly agreed to the collaboration, but the damage to his health caused by the war and the shock of the death of his beloved mother in 1917 made creative work painfully difficult for him during those years. He sent Colette a letter in 1919 apologizing for his lack of progress, but assured her that the piece was beginning to form itself in his head. A few sketches appeared in 1921, but it was not until Raoul Gunsbourg, whose Monte Carlo Opera had enjoyed a sensational success staging Ravel’s sparkling operatic comedy of 1911, L’heure Espagnole (“The Spanish Hour”), offered him a firm contract in 1924 that Ravel disciplined himself to finish L’enfant et les sortilèges. The opera was received enthusiastically at its premiere in Monte Carlo on March 21, 1925 (Victor de Sabata conducted; George Balanchine provided the choreography), and it was soon staged in Paris, Prague, Leipzig, Vienna, Oslo, Milan, San Francisco and elsewhere; Ravel was presented with the Knight’s Cross of the Order of King Leopold of Belgium when L’enfant et les sortilèges was produced in Brussels in March 1926.

A Microcosm of Musical Styles

Ravel said that he conceived L’enfant et les sortilèges, with its almost cinematic speed and its quick procession of characters, both animate and (conventionally) inanimate, in the nature of a fast-paced American revue, for which he employed what he described as “a well-blended mixture of styles from all periods, from Bach to…Ravel, with a little of Massenet, of Puccini, of American music [i.e., jazz, the hottest musical import of the day] and even of Monteverdi.” The story, simple in narrative but rich in characters and incident, concerns a mischievous six-year-old boy who is reproved by his mother for not doing his homework. When she leaves, he flies into a tantrum, assaulting everything in the room, including the cat. Then, as if by magic, the mistreated furniture, clock, books, garden, household animals and even the fire in the grate come to loquacious life to torment the boy in his turn. At the opera’s end, the child is forgiven by his assailants when he thoughtfully tends to a squirrel injured in the mêlée. In his study of the composer, H.H. Stuckenschmidt wrote:

Ravel succeeded [in L’enfant et les sortilèges], as perhaps no one else has but the Danish poet Hans Christian Andersen, in finding the rare language of fairy tales to build insubstantial bridges of fantasy between reality and imagination and in understanding how to reconcile the highly sophisticated with the most naïve.