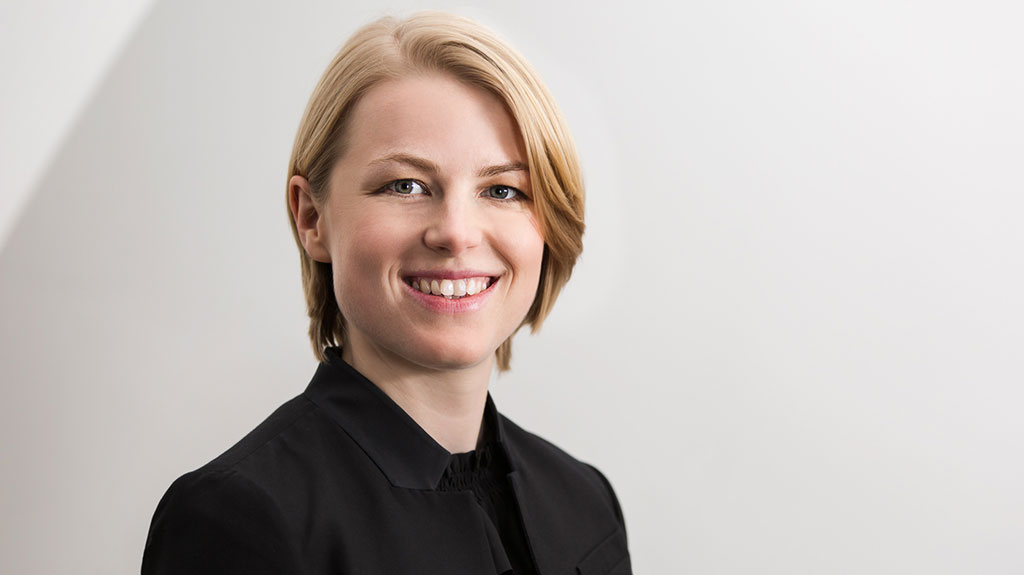 Ruth Reinhardt is quickly establishing herself as one of today’s most dynamic and nuanced young conductors, building a reputation for her musical intelligence, programmatic imagination and elegant performances. Recent engagements include debuts with the symphony orchestras of Detroit, Indianapolis, Baltimore, Houston, San Antonio and Grand Rapids, as well as the Los Angeles and St. Paul chamber orchestras. In Europe, debuts include the Orchestre national d’Île de France in Paris, Frankfurt Radio Symphony, DSO-Berlin, MDR Leipzig Radio Symphony, Helsingborg Symphony, Tonkünstler Orchestra and Gävle Symphony, among others. Return engagements included the Malmö Symphony Orchestra, Kristiansand Symphony Orchestra and Dallas Symphony Orchestra, where she served as Assistant Conductor for two seasons under Jaap van Zweden, concluding at the end of the 2017–18 season.

Reinhardt received her master’s degree in conducting from The Juilliard School, where she studied with Alan Gilbert. Born in Saarbrücken, Germany, she began studying violin at an early age and sang in the children’s chorus of Saarländisches Staatstheater, Saarbrücken’s opera company. She attended Zurich’s University of the Arts (Zürcher Hochschule der Künste) to study violin with Rudolf Koelman and began conducting studies with Constantin Trinks, with additional training under Johannes Schlaefli.

Composition History: Prokofiev completed his Symphony No. 1 on September 10, 1917, while on a summer respite at a small village just outside of his war-torn home city of Petrograd (St. Petersburg) during the Russian Revolution. Prokofiev wrote, “I wanted to compose a symphony in a classical style, and as soon as I began to progress in my work, I christened it the Classical Symphony, first because it sounded much more simple and second out of pure mischief—‘to tease the geese,’ in secret hope that eventually the symphony would become a classic.” Its first performance took place on April 21, 1918, in Petrograd with the composer conducting the Petrograd Court Orchestra.

CSO Subscription Performances: The CSO has performed the Classical Symphony on 15 previous subscription weekends, the first of which was in January 1930 with then-CSO Music Director Fritz Reiner conducting. The work has also been performed at community concerts and regional tours and most recently was featured at subscription concerts in February 2018, Louis Langrée conducting.

Composition History: Bacewicz wrote her Concerto for String Orchestra in 1948; its premiere took place in Warsaw on June 18, 1950 during the General Assembly of the Polish Composers’ Union, Grzegorz Gitelberg conducting. One reviewer’s comment not only reflected the disregard that most of the listening public of the day showed women composers, but also expressed his admiration for the music Bacewicz wrote: “It can be said in all honesty that the honour of Polish composers was saved this time by a woman, Grażyna Bacewicz.… We finally felt a ‘red-blooded piece’ of wholesome and delicious music written with a creative power that is truly virile.” The piece is considered Bacewicz’ “magnum opus.”

CSO Subscription Performances: These are the first CSO performances of the Concerto for String Orchestra.

Composition History: Mendelssohn wrote his Symphony No. 4 in 1832–33 and led the work’s premiere with the Philharmonic Society in London on May 13, 1833. The inspiration for the piece was a trip Mendelssohn made to Italy in 1830–31. He said, “The whole country had such a festive air that I felt as if I were a young prince making his entry,” and noted that the symphony was meant to convey his impressions of the art and landscape of Italy, as well as its people.

CSO Subscription Performances: The CSO has performed the Italian Symphony on 22 previous subscription weekends, the first of which was in February 1898, Frank Van der Stucken conducting; the most recent subscription performance was in April 2016, Carlo Montanaro conducting. Other performance highlights include a special concert by the Boston Symphony Orchestra at Music Hall in December 1947, with its then-Music Director Serge Koussevitzky conducting, and several regional and U.S. tours and community performances by the CSO.