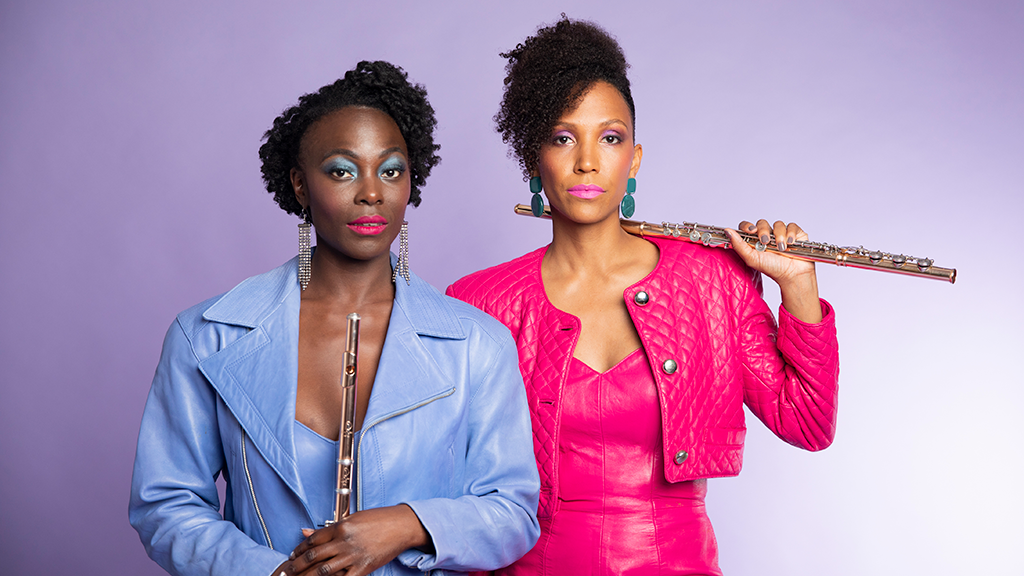 “…their sound has an ethereal, arty flavor that comes from years of dedicated classical music training.” – Dan Grunebaum, Metropolis Magazine (July 24, 2014)
Flutronix is Nathalie Joachim and Allison Loggins-Hull, two blazing young flutists who share their combined influences and aspirations to create a new kind of music greater than the sum of its creators.
“Among Flutronix’s strongest attributes – aside from performance and arranging skills nonpareil – is not only their willingness to inject beatz motifs and other unlikely accents into a jazz-meets-classical-uptown mold but as well making deft collaborative choices while doing so” – Dave Cantrell, Caught in the Carousel (April 7, 2014)
Their multiple roles as composers, performers and producers has moved them to collaborate with artists and ensembles from different realms and disciplines, including legendary hip-hop producer Ski Beatz, electronic music sensation Dan Deacon, and the International Contemporary Ensemble.
“Grooves, warmth, melody, seductive vocals – this second album from Brooklyn’s Flutronix, the flute-wielding duo of Nathalie Joachim and Allison Loggins-Hull is a home run.” – Rob Ross, PopDose (May 30, 2014)
Nathalie and Allison knew they had to master and manage every aspect of their work – from music, publishing and business interests to sharing their hard-earned knowledge and experience – in order to achieve success on their terms. Flutronix publishes its own work and hosts Real Flutists, an online web series which presents iconic flutists from all walks of music in an informal interview format where they share their insights directly with viewers. Flutronix also presents on-site workshops for university students to develop their confidence, know-how and awareness in developing and sustaining a music career in the 21st century. They teach musical workshops for grades K – 12 using guided discussion and live examples to demonstrate non-traditional performance practices, including improvisation, sampling, contemporary performance techniques and the integration of electronics.
…a unique blend of classical music, hip-hop, electronic programming and soulful vocals reminiscent of neo-R&B stars like Erykah Badu." - Tad Hendrickson , The Wall Street Journal (Mar 21, 2013)
Flutronix has gained traction and a growing fan base through performances at WNYC’s Greenespace, the Brooklyn Museum and Lincoln Center’s David Rubenstein Atrium, and the duo produce an ongoing collaborative new music series, Flutronix and Friends. Their sophomore album was co-produced by Flutronix and Tony Maimone, and was released in 2014 independently in the United States and on Village Again Records in Japan to critical kudos. Their original urban art pop music, as described in The Brooklyn Paper, “brings a modern sound to the classical instrument”, navigating a shared landscape of pop, R&B, classical and contemporary styles using acoustic and electronic elements.
“…redefining the flute and modernizing its sound by hauling it squarely into the world of popular music.” – Richardine Bartee, MTV Iggy (April 12, 2013)
The duo has been featured in leading Japanese fashion magazine, FUDGE, as well as television segments on Telemundo, BK Live, The Daily Buzz, and an internationally broadcast ESPN super bowl commercial. In addition, Flutronix music has been broadcast on NPR, WNYC, WQXR, Q2, J-Wave, Tokyo FM, FM Yokohama and other popular radio stations internationally.
Nathalie Joachim and Allison Loggins-Hull are both accomplished players of the instrument in their own right, but together as Flutronix the duo conjure something special.” – Alexander Abnos, WNYC Gig Alert (January 15, 2013)
Much sought after as clinicians and educators, Flutronix has presented and lectured for The Juilliard School, New England Conservatory, the University of Michigan, New York Flute Club, Atlanta Flute Club and other institutions across the country.