to Write Solo-Instrument Fanfares in Response to the Coronavirus Pandemic

CINCINNATI, OH (August 5, 2020) – The Cincinnati Symphony Orchestra (CSO) and Cincinnati Pops today announced seven additional composers for their ongoing commissioning initiative, The Fanfare Project, bringing the total number of commissions thus far to 20. The Fanfare Project was launched in May 2020 as a reflection of the many ways in which daily life has been altered by the global pandemic. The inspiration for the project was Aaron Copland’s Fanfare for the Common Man, commissioned and premiered by the CSO during World War II. Just as Fanfare for the Common Man paid tribute to all of humanity in its struggle for peace, the new commissions are intended to pay homage to people, emotions, memories and ideas that currently have heightened importance, relevance and meaning.

Each composer has been asked to write a one-minute work for a solo instrumentalist of their choice. The world premieres are being video recorded by the soloists from their homes and are released one-by-one, along with the score for each piece, over the Orchestras’ digital platforms and social media. Like the initial group, the second wave of composers represents a diverse range of personal backgrounds and musical styles.

Samuel Carl Adams, a composer of acoustic and electroacoustic music, and a recent Guggenheim fellow, frequently writes for orchestras and is an accomplished bass player. Adams is writing for CSO Principal Bass Owen Lee.

The Fanfare Project commission by Samuel Carl Adams has been made possible by Mr. and Mrs. Paul Isaacs.

Daníel Bjarnason wrote Collider, a CSO co-commission with MusicNow and the Iceland Symphony Orchestra. Music Director Louis Langrée conducted the world premiere in 2015, and again as part of the Orchestra’s 125th anniversary concert in January 2020. He will write and perform his own work for prepared piano.

Jason Robert Brown is a Tony Award-winning American musical theater composer, best known for Parade and The Bridges of Madison County. He will be writing for CSO Principal Flute Randy Bowman.

The Fanfare Project commission by Jason Robert Brown has been made possible by Colin Ullman.

Courtney Bryan’s music is in conversation with various musical genres, including jazz and other types of experimental music, as well as traditional gospel, spirituals, and hymns. Focusing on bridging the sacred and the secular, she has chosen to write for CSO ClarinetistIxi Chen.

The Fanfare Project commission by Courtney Bryan has been made possible by Clever Crazes for Kids and Dianne Dunkelman.

The music of Grammy-winner and MacArthur "Genius Grant” recipient Rhiannon Giddens excavates the past to reveal truths about our present, blending folk, gospel, jazz, and country. Well-known to Cincinnati Pops audiences, she appears on the Pops’ Grammy-nominated American Originals: 1918 She writes for Edna Pierce, a violist in the CSO/CCM Diversity Fellowship. 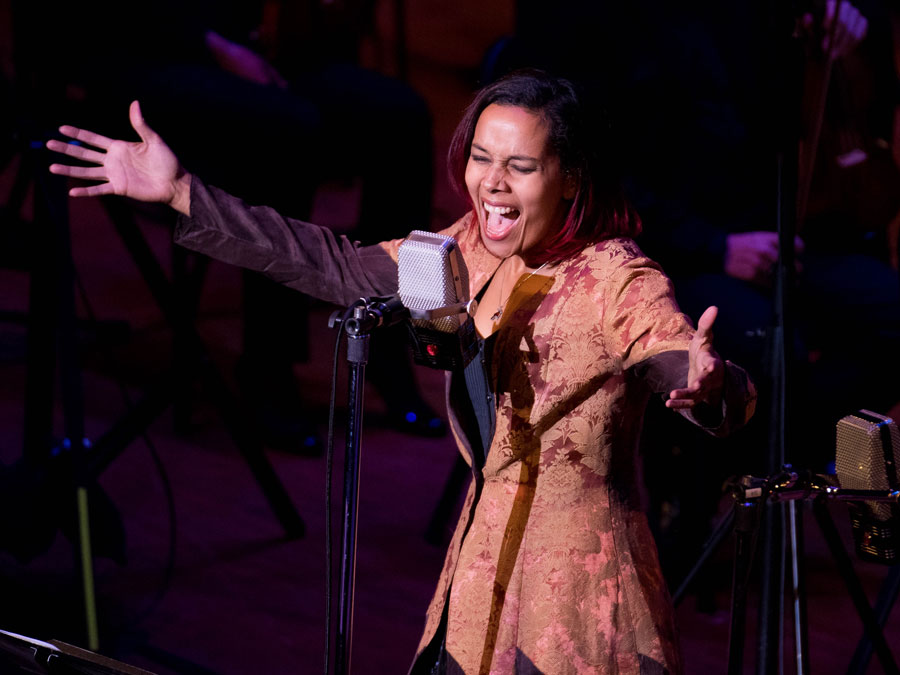 The Fanfare Project commission by Rhiannon Giddens has been made possible by Jonathan Ullman.

Jonathan Bailey Holland was the CSO’s first Composer-in-Residence and has composed several works for the Orchestra, including: Halcyon Sun for the opening of Cincinnati’s National Underground Railroad Freedom Center and Equality for narrator and orchestra featuring the poetry of Maya Angelou with narration by actor Regina Taylor and rapper/actor Common. His fanfare will be performed by CSO Principal Trombone Christian Ganicenco.

The Fanfare Project commission piece by Jonathan Bailey Holland has been made possible by Bill and Denise Helmsderfer.

Jeffrey Mumford is the recipient of an impressive list of fellowships, grants, and awards for composition, writing for orchestras, soloists and chamber ensembles. Among the dozens of commissions to his credit a still radiance within dark air, commissioned by WGUC-FM and premiered at the Linton Chamber Music Series, and . . .and symphonies of deepening light . . . expanding . . . ever cavernous, commissioned for the CSO in celebration of the 50th wedding anniversary of Ann and Harry Santen, longtime supporters of the Orchestra. Mr. Mumford’s fanfare will be composed for CSO Cellist Daniel Culnan.

The Fanfare Project commission by Jeffrey Mumford has been made possible by Ann and Harry Santen.

The Fanfare Project was borne of the Orchestra’s heritage as a champion of the music of its time and of the role of music to unite us. The initiative harkens back to a similar undertaking catalyzed by the Orchestra in a previous era of global disruption. In 1942, the Cincinnati Symphony Orchestra and music director Eugene Goossens commissioned 18 fanfares to be performed in response to and in support of the Allied effort in World War II.  These fanfares included Fanfare for the Fighting French (Walter Piston), Fanfare for American Heroes (William Grant Still), Fanfare for Paratroopers (Paul Creston), among others. The most enduring example of that initiative is Copland’s Fanfare for the Common Man, of which the Orchestra gave the world premiere on March 12, 1943.

The Cincinnati Symphony Orchestra gratefully acknowledges support from the following:

The CSO and Pops extend its thanks to the following individuals for their support of The Fanfare Project: