“It’s been two months since we presented
the Beethoven Akademie concert and it feels like two years. I miss you
so much—we all miss you so much.”—Louis Langrée

With those words, Louis Langrée launched the CSO’s digital presence on April 30, 2020, six weeks after the pandemic forced the season’s cancellation.

Seated in his living room and sporting a beard, Langrée shared insights, images and recorded excerpts with a virtual audience, joined by CSO President and CEO Jonathan Martin (from his home) serving as a moderator for the Q&A.

Transmitting the digital signal to the virtual audience fell to staff members working from their individual homes.

It was far from state-of-the-art. Audio faded or cut out entirely and the video wasn’t pristine.

Just three weeks later, the production values dramatically improved with a digitally streamed performance of Mahler’s Piano Quintet and the world premiere of a fanfare for oboe by Matthias Pintscher livestreamed from Music Hall on May 16, 2020. With the reality of live audiences doubtful, at least for the 2020–21 season’s opening months, the CSO fully committed to livestreamed performances as a necessary component for the Orchestra’s future.

“What began as a lifeline, our only way to connect, has evolved into a new separate experience,” said Jonathan Martin.

The CSO’s commitment to digital media as an effective outreach and marketing tool was grounded in ensuring that what went out to global audiences exceeded expectations.

Martin described it as ongoing drama. “Act I is livestreaming because your hall is closed. Act II is taking that experience and making it more polished and compelling because it has to reflect the best your orchestra can give.”

“We had to up our game and we invested in a significant number of resources, from cameras to upgraded lighting systems and all the technical expertise that requires.”

The CSO was able to make that investment thanks to the generosity of the Carl Jacobs Foundation, Ohio Valley Foundation, The Thomas J. Emery Memorial Fund, Jack and Marilyn Osborn, State of Ohio—CARES Act, The John A. Schroth Family Charitable Trust, PNC Charitable Trust, an anonymous donor, and many private donors.

And the CSO is on to the next act, moving from a breathtaking pivot into a new medium and strategizing how to engage and retain audiences both in the hall and digitally. In the summer of 2020, the CSO created the Digital Content and Innovation department and, in March 2021, hired as its director KC Commander, who had served as a digital media producer for the Atlanta Symphony Orchestra.

“Our overarching goals for livestreaming include elevating the CSO and Pops as distinctive brands, while reflecting our core artistic strengths and values, including our commitment to diversity,” said Robert McGrath, the CSO’s Chief Operating Officer.

“Additionally, we’re looking for a balance of programming, a commitment to creating new works, highlighting composers and artists of color who have been historically under-represented as well as finding traditional repertory that reflects the CSO’s American and German roots,” he continued. “For this season [2021–22], it wasn’t easy to choose!”

Since livestreaming began in 2020, 24 concerts have been streamed and viewed by more than two million viewers on the CSO’s Facebook and YouTube channels. During the current season to date, a total of four CSO and Pops livestreamed concerts attracted 29,000 viewers, 17,500 of whom watched a live broadcast.

If viewers could see behind the scenes, they would see the equivalent of a chamber orchestra working to deliver every aspect of the livestream. The work begins weeks before the broadcast and involves meticulous planning.

"Very impressed with the camera work. Clearly the operator is familiar with the scores and keeps the melody section in frames."
—MB, livestream comment

KC Commander is delighted to hear that. She works closely with the video director overseeing the livestream to ensure that musical and visual storytelling match up.

Even before meeting with the video director, performance licenses and rights must be cleared. Then the concert’s scores are developed into a “shot list,” in addition to camera angles and positions, followed by conversations between director and conductor to share insights and challenges on building the video component.

“There’s give and take in those meetings,” Commander explained. “The conductor may want to bring out a specific passage that presents a technical challenge for the director and vice versa. The 90-minute concert can be the product of hours of conversations.”

Livestream rehearsals are in sync with Orchestra rehearsals. Almost 30 microphones are suspended above the stage and placed on the stage, as many as 10 cameras are positioned throughout the hall, and a whole team of people are in place to run the various aspects of the stream. 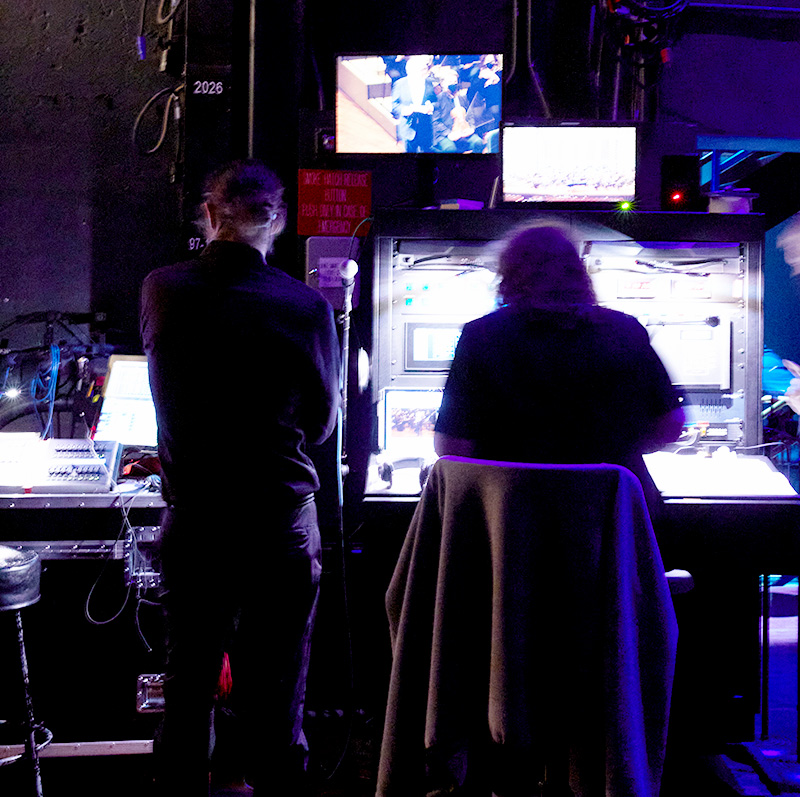 “There can be as many as 20 people backstage running the show,” said Brian Schott, CSO lighting specialist, stage manager and crew steward for the CSO. The livestream presents challenges for lighting, he explained: “All of the lights are LED and some of the cameras have a hard time picking up bright colors, so I’m always talking with the operators to make sure the colors are true.”

During a livestream, additional CSO staff watch the livestream on Facebook and YouTube to check on video and sound compression, the social media team interact with the audience in the chat, the stage manager watches via iPad and a dedicated monitor feed, and Philanthropy staff watch for donor interaction and follow-up. This is in addition to the staff who are serving Music Hall’s in-person audience.

How does all this activity affect the Orchestra? “In the beginning, we were very conscious of our movements, but we’re used to it now,” said Ilya Finkelshteyn, Principal Cello. “The crews try very hard to be inconspicuous so we can concentrate on our performance.”

Principal Clarinet Chris Pell agreed and added that performances are enhanced by the high quality of the technical staff. “This season especially, the audio quality has been great!”

Mark Donahue is a partner in the Boston-based recording company Soundmirror and has more than 30 years of experience recording major orchestras in the U.S., along with Grammys for classical music production. He took over as the livestream sound engineer this fall, following the sudden deaths of Five-Four Productions producers Michael Bishop and Thom Moore.

His work begins when rehearsals start. “After I hang microphones, I’m up in the booth, listening and then recording. I have it relatively easy until I get back to Boston, where we do post-production for what goes up on YouTube.”

New works pose challenges for sound balancing but for Donahue, it’s an opportunity to be creative. “Everyone is feeling their way into the piece, and notes from the music staff help everyone achieve what will sound best.”

Donahue checks the edits with the conductor, sometimes daily. After editing, the sound is remixed and the video team of local company Drive Media House takes over, synchronizing video with the audio edits. Following color correction, the finished video is ready for the website and YouTube, as well as for promotional and educational purposes.

“…found this by accident tonight
and just loving every minute of it.”
—ICP, livestream comment.

“I love the CSO and the Pops.
It is such a blessing to get to watch from Tennessee.”
—RGB, livestream comment.

Accessibility remains central to the CSO’s livestream strategy, which is why the livestreams are presented at no charge. Following the live broadcast, the concert is on the CSO’s website and YouTube for 24 hours at no charge. This strategy has enabled the CSO to engage with its growing global fan base as well as reaching out to the Greater Cincinnati community.

Robert McGrath noted that industry leaders, cultural influencers, music critics, conductors, composers and musicians seek out the CSO’s livestreams and provide their complimentary recognition and commentary on what the CSO is doing. “It’s a delight to see,” he added.

Another bonus is the viewing community and feedback created by the interactive chat function. The comments throughout this article are from livestream chats on Facebook and YouTube, moderated by CSO staff who answer questions and respond to comments from the virtual audiences. For Chris Pell, some comments proved serendipitous.

“I played in the Louisiana Philharmonic, and I was so moved by comments from colleagues in that orchestra who posted,” he recalled. “It’s helped maintain those friendships.”

The chat forum also provides the technical team with important information about sound and video. “If someone can’t hear a solo instrument or the video gets fuzzy, we hear about it!” Commander said.

“I’ll be watching more of these in the future!”
—AC, livestream comment

Livestreamed concerts are now integral to the CSO’s future programming and initiatives as musicians and administration continue to study the impact on attendance, performance and outreach.

Ilya Finkelshteyn and Chris Pell agree that the livestreams are opportunities for them to critically listen and watch performances.

Robert McGrath and KC Commander are exploring platforms beyond Facebook and YouTube to expand the global reach of CSO concerts.

Everyone agrees that a livestream can never equal a live concert experience. In-person attendance does not appear to be affected by livestreams; indeed, some concerts have been sold out. One of the goals is to encourage digital viewers to come to a live concert, which Martin and McGrath acknowledge will take time. But analysis of viewer numbers showed that virtual viewers are spending more time on the livestream. In an age of diminishing attention spans, that’s encouraging.

“Oh the timing and precision and presentation of the orchestra
is excellent! I would love to be in a professional orchestra someday.
Thank you SO much for livestreaming!”
—BK, livestream comment

The CSO’s achievements in the digital realm are remarkable by any standard. As staff and musicians ponder livestreaming’s next act, Mark Donahue’s assessment is spot-on: “The Cincinnati Symphony Orchestra is a great organization with a great history. They tend to punch above their weight.”