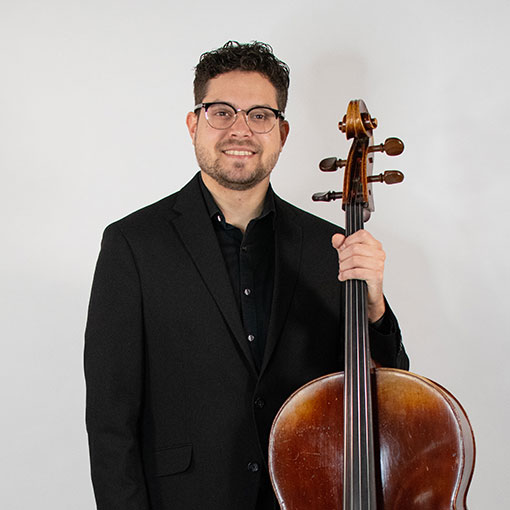 Venezuelan cellist Luis Parra, began his musical journey at age ten, studying with cellist Tibisay Silva at the world-renowned program “El Sistema'' in San Felipe, Venezuela.  In 2012, Parra became a student of the Latinamerican Cello Academy, where he continued his studies with cellists William Molina and Wilfredo Perez and had the opportunity to work with other prominent cellists, including German Marcano and Marek Gajzler, among others

In 2013, Parra was named Principal Cellist of the Yaracuy Youth Symphony Orchestra and was invited to perform with the professional Caracas Municipal Orchestra and the Teresa Carreño Symphony. Parra made his solo debut with the Yaracuy Youth Symphony Orchestra in 2014, performing the Saint Saens Cello Concerto and his international debut with the Beirut Philharmonic in Ghalboun, Lebanon, where he performed the Elgar Cello Concerto.

As an accomplished chamber musician, Parra has participated in many festivals worldwide, including the Nuevo Mundo Festival and Academy in Aruba, the Yawmiyat Festival in Ghalboun, Lebanon, Center Stage Strings in Ann Arbor, Michigan, and the Amelia Island Chamber Music Festival in Florida.

In 2017, Parra moved to the United States, accepting a full scholarship to study at the Robert McDuffie Center for Strings at Mercer University with cellists Richard Aaron, Julie Albers, and Leo Singer. At Mercer, Parra had the opportunity to perform in masterclasses for great cellists and pedagogues, such as Edward Arron and Clive Greensmith, and performed alongside the Cavani String Quartet.  In May of 2021, Parra was awarded the General Excellence in Music Award from the Townsend School of Music at Mercer University and graduated Summa Cum Laude with a Bachelor’s Degree in Music Performance. Currently, Luis Parra is a Master’s student of Alan Rafferty at University of Cincinnati College-Conservatory of Music, attending as a CSO/CCM Diversity Fellow. Parra plays on a “Neuner & Hornsteiner” cello, generously loaned by the Carlsen Cello Foundation from Seattle, WA.

You can enjoy Luis perfoming on the Music Hall stage at the following concerts: