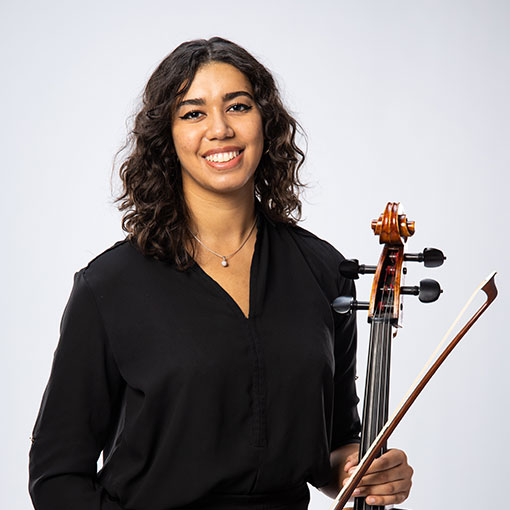 Samantha Powell recently graduated with a Bachelor’s in Cello Performance from The Cleveland Institute of Music. There she studied with the associate principal cellist of The Cleveland Orchestra, Richard Weiss. A 2017 graduate of Centennial High School, she was very involved in her orchestra as principal cellist, as well as her local church, where she has been a frequent featured soloist. Samantha started her music studies with cello at the age of 5 studying with John Landefeld, Associate Principal Cellist of the Plano Symphony Orchestra. She has won spots in the top All-Region orchestras in five consecutive years and has received All-State solo and orchestral honors. She was also a dedicated member of the Greater Dallas Youth Orchestra where she was featured as a concerto winner of the GDYO Philharmonic and the principal cellist of the top ensemble. At CIM, she has been a principal cellist of the orchestra, been very active in chamber music being in groups like the Thalia Quartet which was selected for the Advanced String Quartet program, and has participated soloistically in Sonata Seminar where again being featured in concert. She was recently awarded for best Bach in the Cleveland Cello Society Scholarship Competition. Festivals where she has been a participant include The International Lyric Academy, Graz American Institute of Musical Studies in Austria, National Symphony Orchestra Summer Institute and recently received a fellowship with the National Orchestra Institute.

You can enjoy Samantha perfoming on the Music Hall stage at the following concerts: